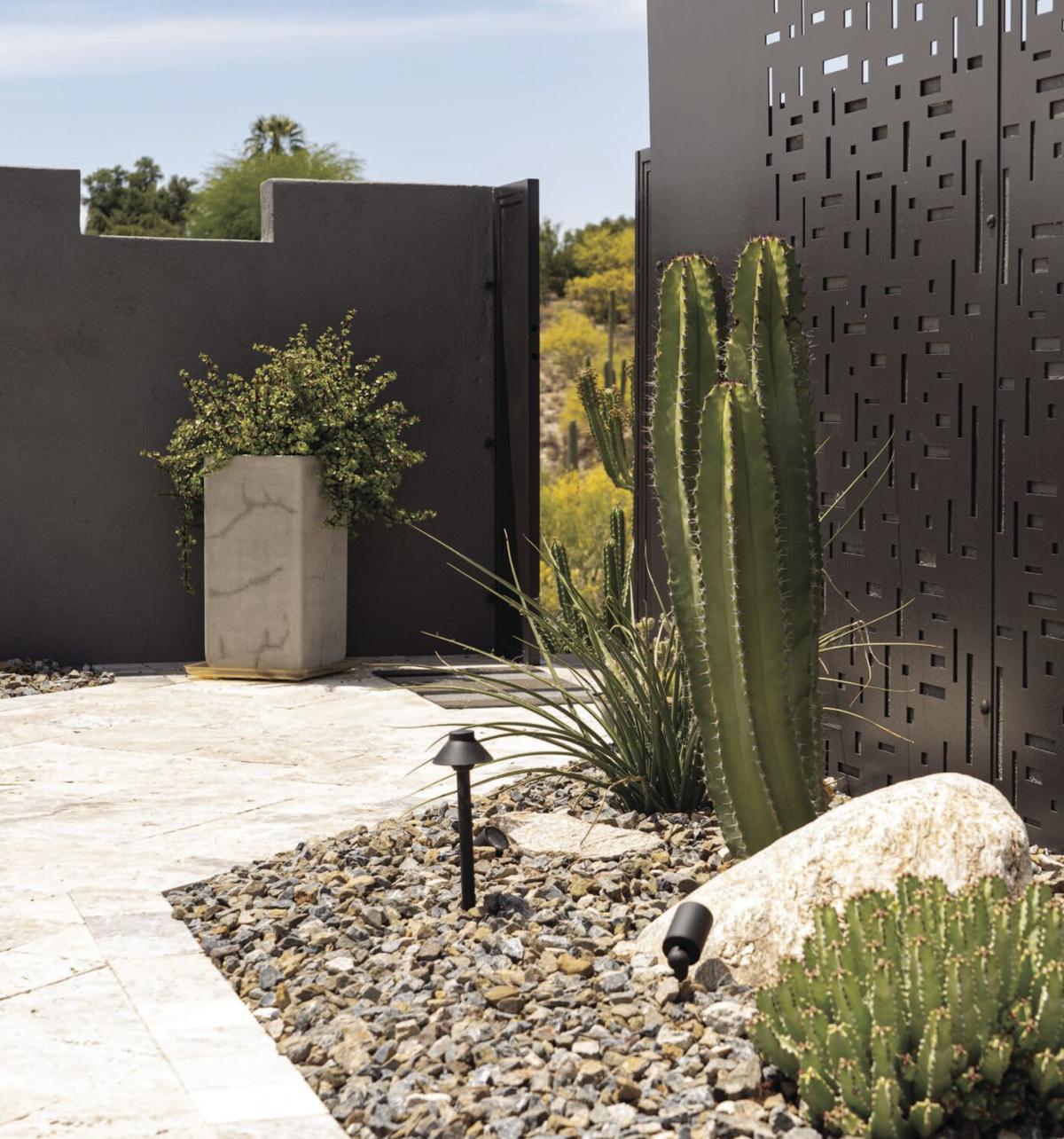 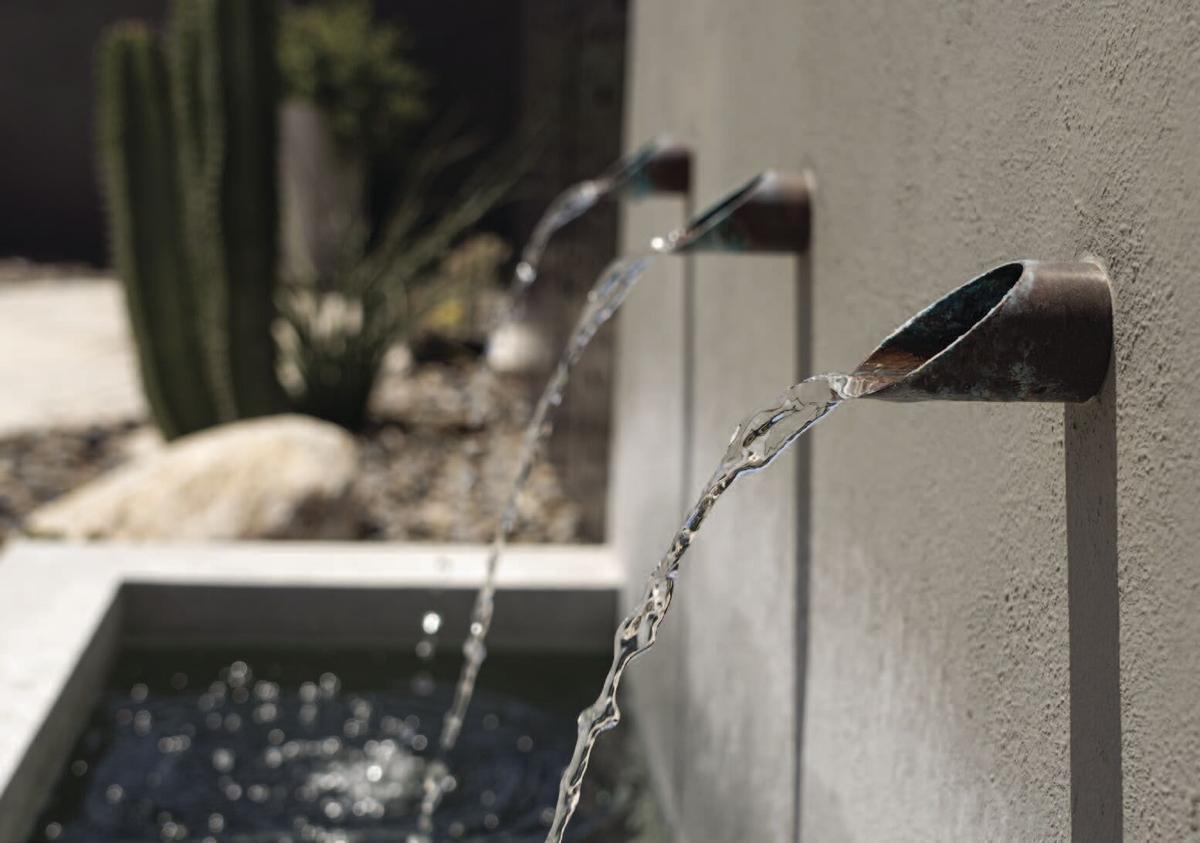 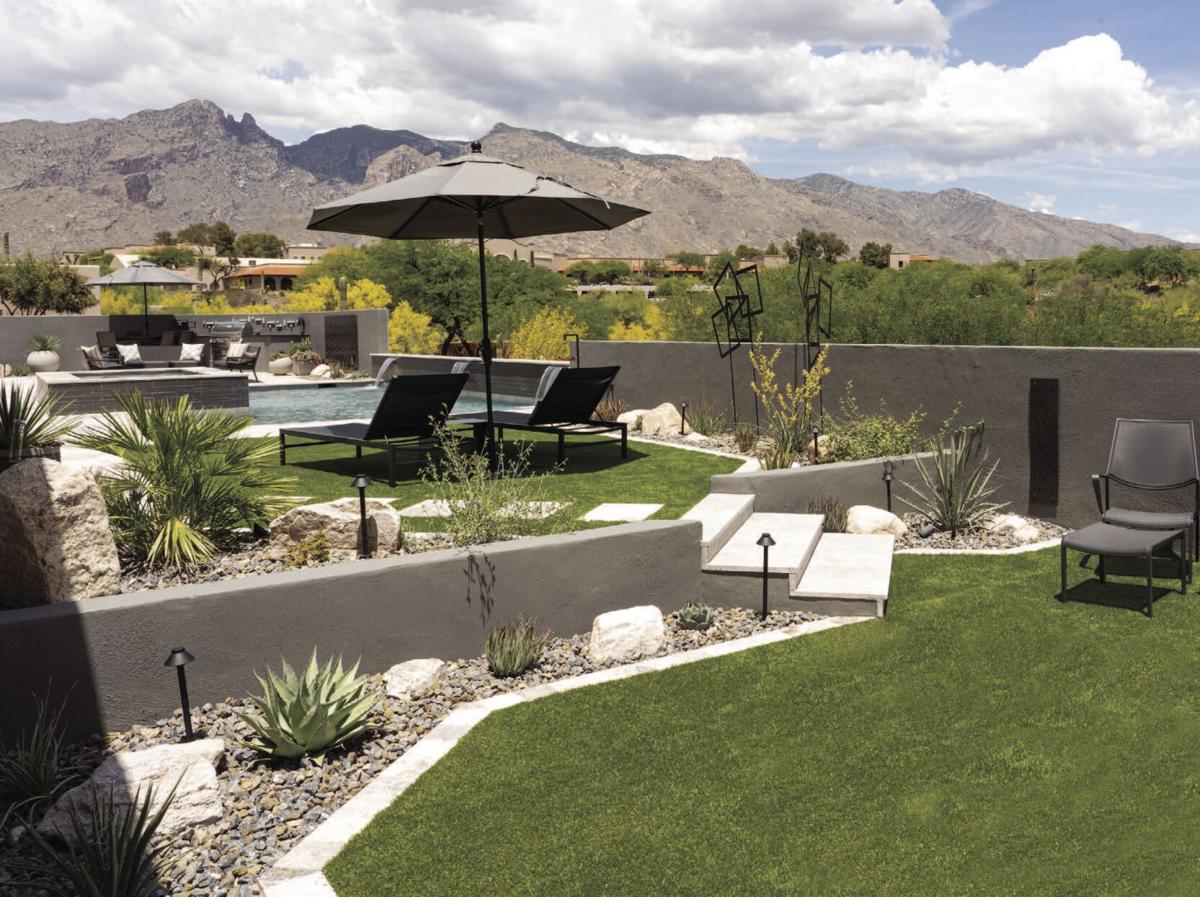 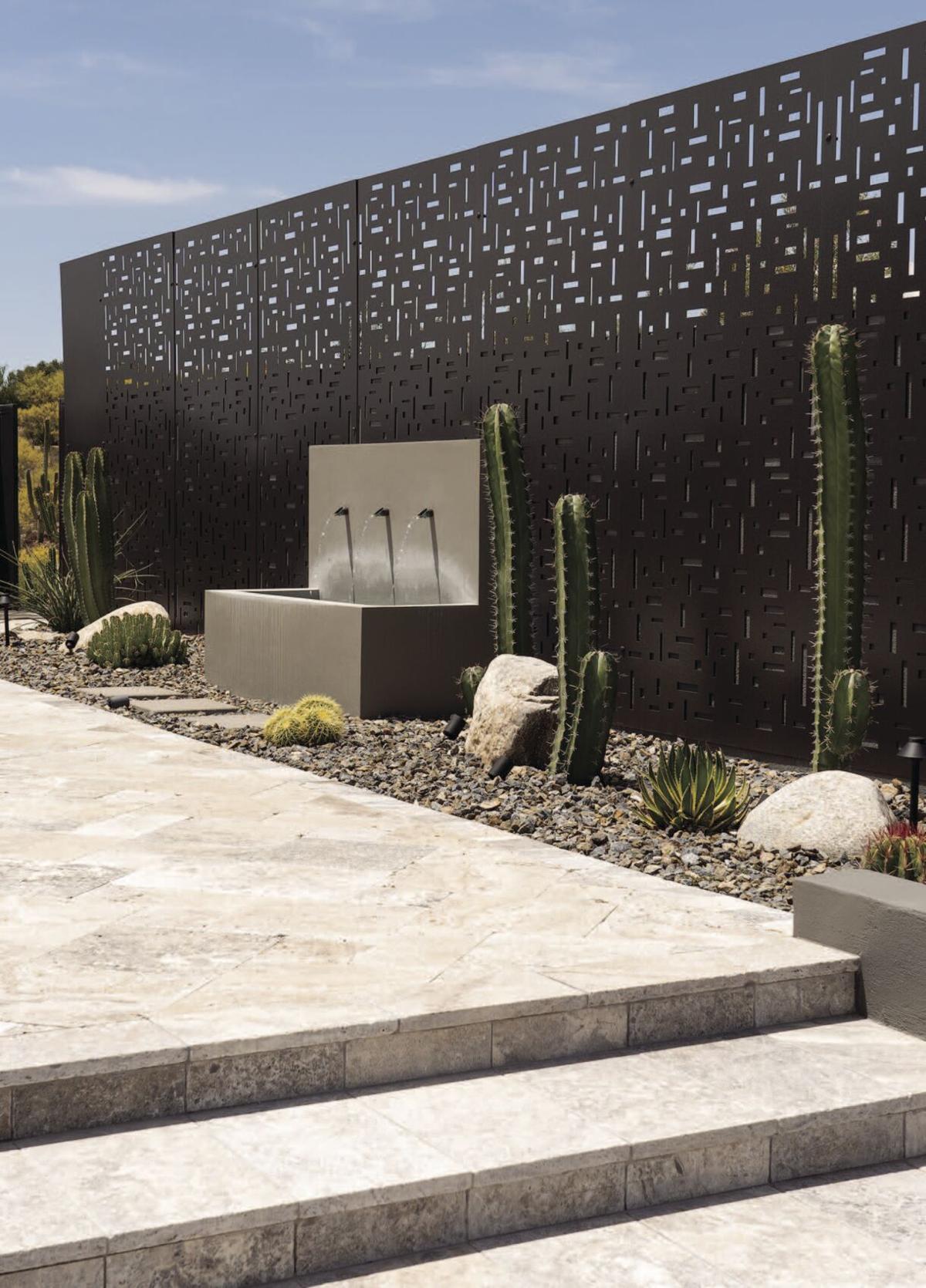 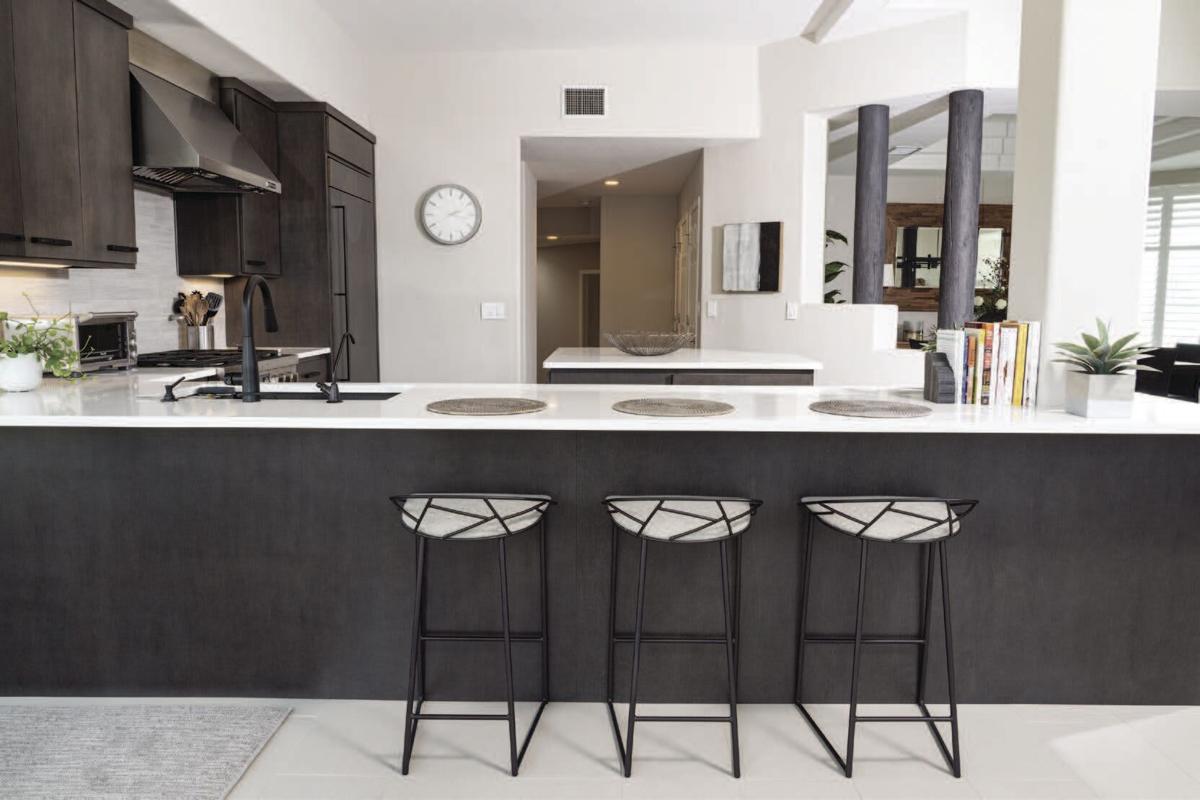 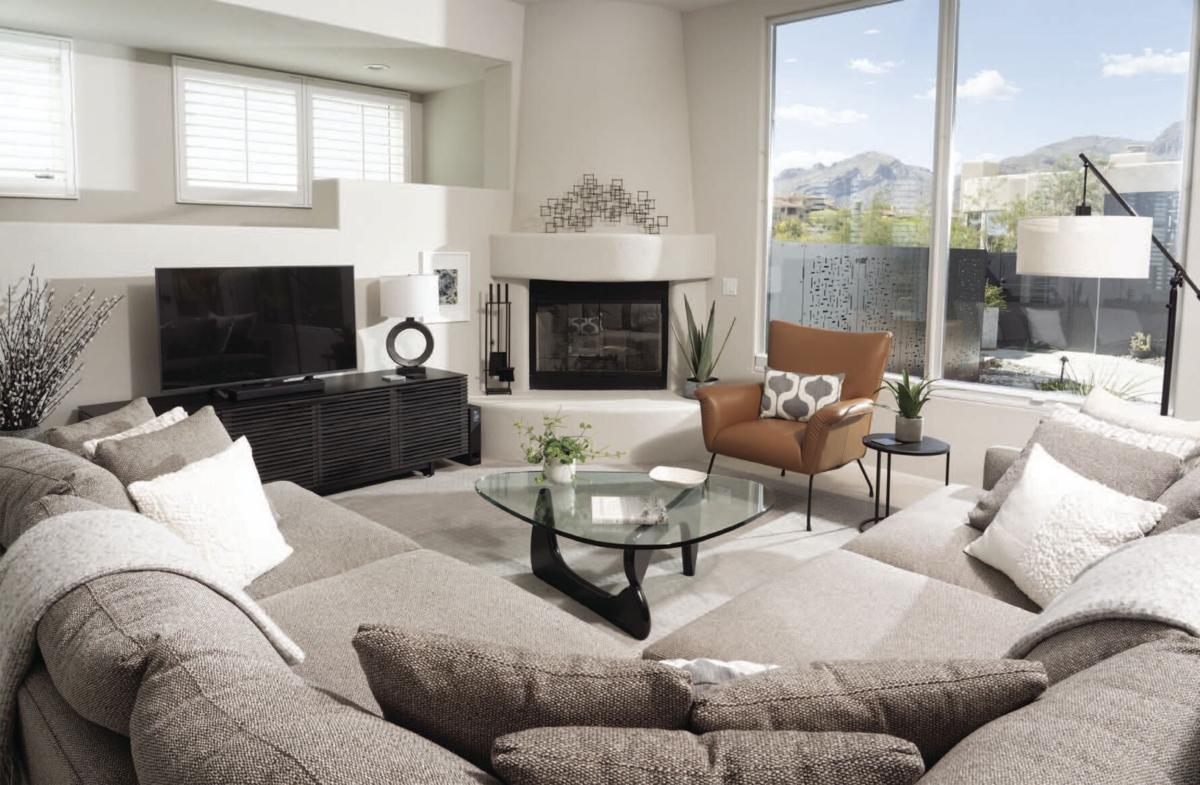 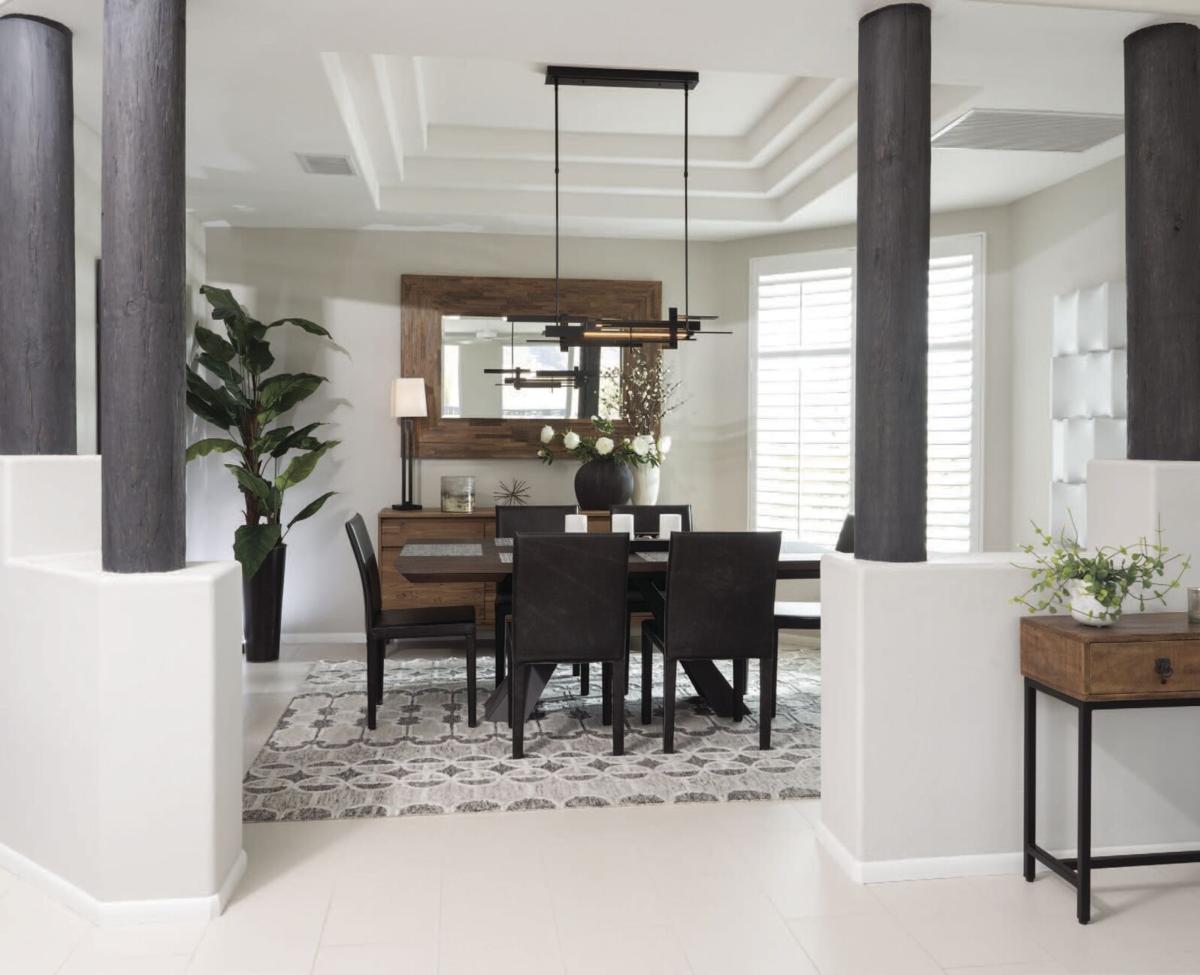 An outdated house with a lot of potential received a full makeover, inside and out.

It takes vision to see beyond a décor in need of a modernized look and into the “bones” of a home; fortunately, homeowners Sally and George Gepp have nearly X-ray vision. When the couple purchased their foothills home in early 2017, they put their talents to work renovating the ’90s-era Southwest contemporary home.

It was the views, then the geometry that initially attracted the couple to the 2,800-square-foot, three-bedroom abode. “When I walked in the door the first time, I felt like I was home. I love this house,” Sally says. “It’s quirky, like me!”

Being new to Tucson, Sally wanted to meet nearby residents before committing to the purchase. “I knocked on a neighbor’s door. We had an instant connection. And after seeing her entire home, inside and out, I asked whom she would recommend that I call first. She said, ‘Rob Vincent, The Landscape Cosmetologist. He will help you with anything outside and can guide you to contractors for the inside of the house, as well.’ So, I had Rob over before putting in our offer. He spent two hours with the Realtor and me, going over the ideas I had. I needed to know if they were feasible in the desert and in the neighborhood.” Vincent knew the neighborhood well, as well as most of the local HOAs, from working with homeowners personally. “He assured me my ideas were possible, and gave me names to call to check a few things before buying,” Sally says. “I followed his advice, and the rest is history.”

The home’s great room and kitchen provided an open concept design perfect for casual living. Walls of windows offered sweeping views of the foothills and the Santa Catalinas. Sally immediately recognized that the unusual angles and general layout of the home offered many design possibilities. Up to this point her style had been traditional, but she decided to test her skills at creating a more modern feel.

She quickly set to work piecing her vision together with a handful of local craftsmen. Sally had the entire inside painted a beautiful light gray color by master painters and sheetrock repair experts at Burlavin Quality Industries.

She used builder Carlo Wilson, owner of Dirt to Done, to update all three of the bathroom vanities (custom made and designed by Harpers, Ltd.) with countertops installed by fabricator Eddie Gamino and his son of Gamino Countertops. Initially, there wasn’t a plan to redesign the kitchen, but after working with Carlo and Harpers on the bathrooms, she trusted their expertise and decided to get it done. ”I never looked back. It was painless, and completed in record time!”

Eight decorative wood timbers encircled the main room. After careful consideration, Sally asked Wilson to remove three and cover a fourth one with sheetrock. The remaining four, which framed the dining area, were stained a light ebony to match the new custom cabinetry. Soffits in the kitchen were removed to make room for the taller sleeker cabinets that now provide more storage space. The countertops, from Arizona Tile, were done in a white quartz, which also was used in the bathrooms and utility room.

“Start to finish, the inside of the home took three months,” Sally notes.

She then felt she could focus on the real reason they bought the house — Tucson’s terrific weather! Sally and George wanted to create outdoor spaces to enjoy all year and share with friends and family. She loves gardening, something she had done extensively in both Texas and New Jersey, so she couldn’t wait to get her hands on the grounds of the home. She quickly realized, after two broken shovels, that she would need Rob Vincent and his crews sooner than she thought.

The list was long and needed to start with a new driveway. “Luckily, it had been planned with the seller and general contractor Gene DeVitis of GDV Construction, and approved by the HOA, before we purchased the home,” says Sally.

Following the driveway install, Sally was ready for Vincent and his crews to get started. They met at B & B Cactus Farm to select plants. Sally did her homework selecting those native to the desert Southwest. “I wanted to work with the climate, creating a look that included beautiful and distinctive native plants to ensure they would thrive in my care.” With Vincent’s guidance and extensive knowledge of the plant varieties, a unique landscape was created, with a combination of boulders, gravel and simple plantings.

Vincent’s landscape design allowed a continuous flow around the entire perimeter of the home, complete with walkways and steps leading to the gates on both sides of the backyard.

The backyard was another story. ”My design was detailed, intricate and mostly hardscape,” Vincent explains. Because of the scale of the project, Vincent suggested a specialist in hardscape, and Sally interviewed six or seven companies and chose to partner with The Garden Gate.

All the cinderblock walls were removed and rebuilt, extending out from the original footprint anywhere from three to 20 feet. This quadrupled the living space, creating three levels and four separate seating areas, each with its own seating and view of the city lights or the Catalinas. The pool and spa, remodeled by Imperial Pools, now features a raised wall, where an infinity edge was previously, with descending waterfalls and a brand-new enlarged rectangular spa.

Planting beds were created along the perimeter of the entire space, with one long planter as a division between two main areas containing a long, built-in travertine-capped bench wall.

Tumbled travertine flooring adds a rugged yet sophisticated touch. Once the walls were up and the travertine was laid, it was time for friend and artist Ty Coon to assist Sally in creating areas of visual interest and privacy fencing within each sitting area. Santa Rita Steel laser-cut Sally’s design, and Anderson’s powder-coated the steel fencing and artwork throughout. An outdoor kitchen rounds out the design.

The result of the remodel is that the Gepps are able to enjoy so much of what they love about the Old Pueblo.

Sally, originally from Midland, Texas, and George from Santiago, Chile, had spent the last 30 years on the East Coast. Tucson reminds them of both of those places in many different ways. “It holds a raw beauty all its own, not to mention an absence of snow and the beautiful sunshine!” Sally says with a laugh.