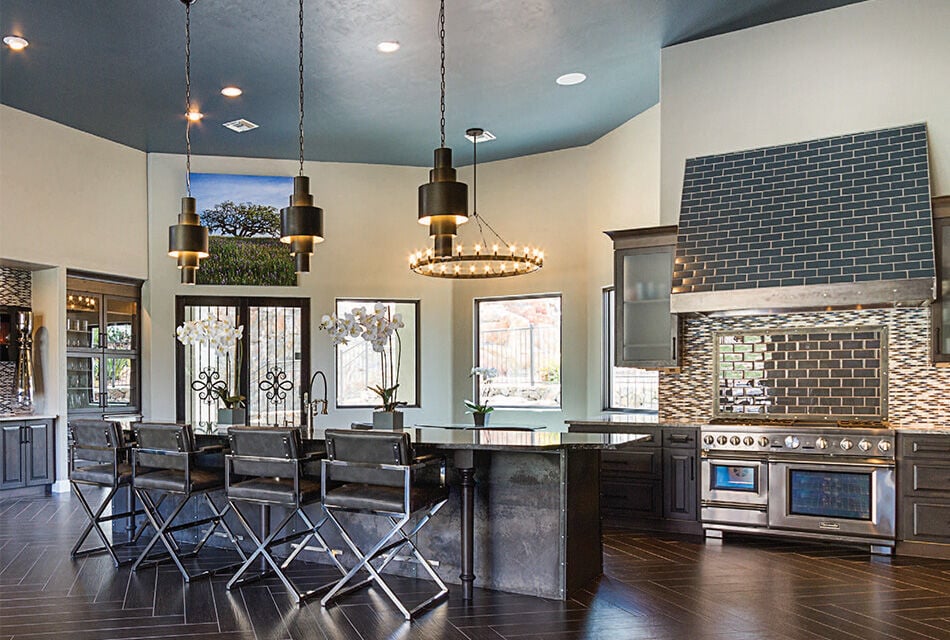 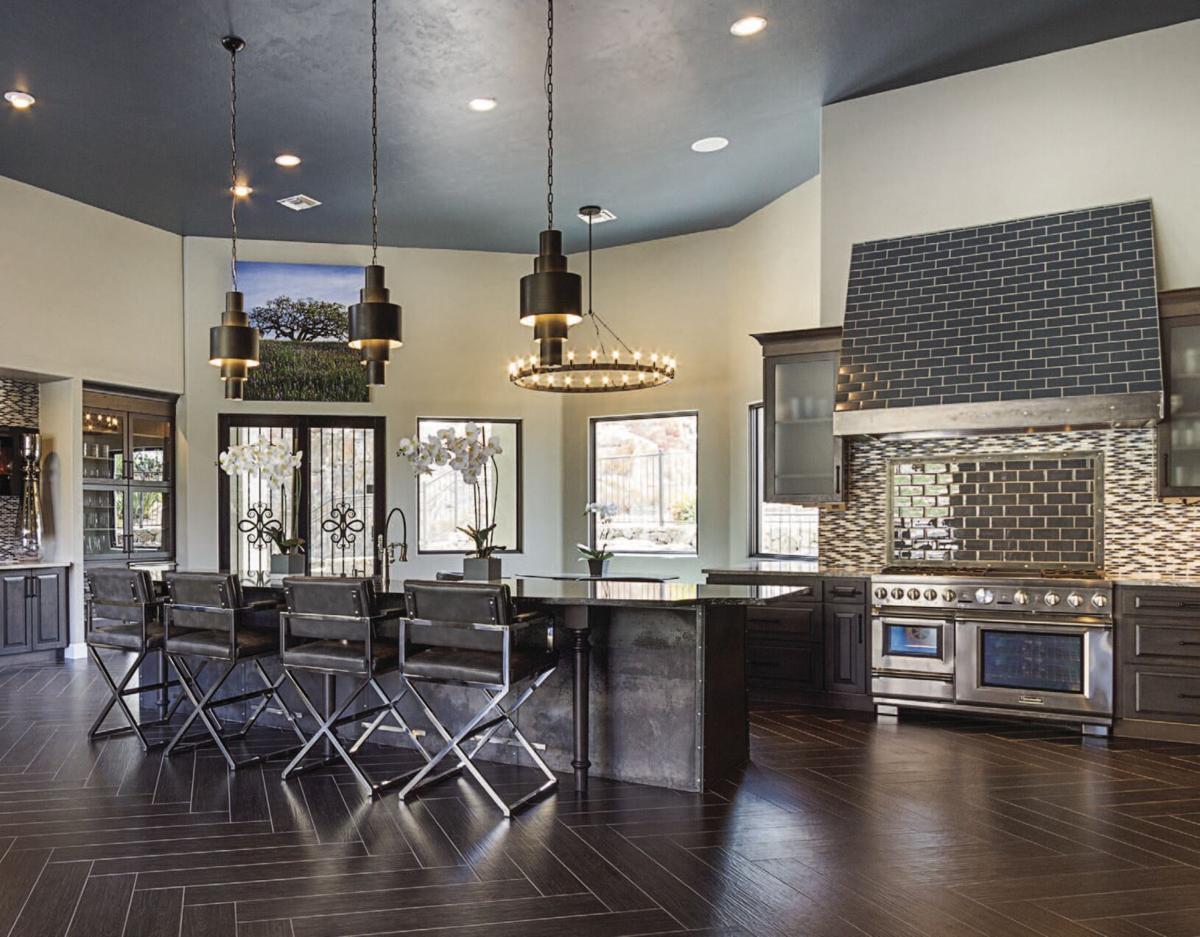 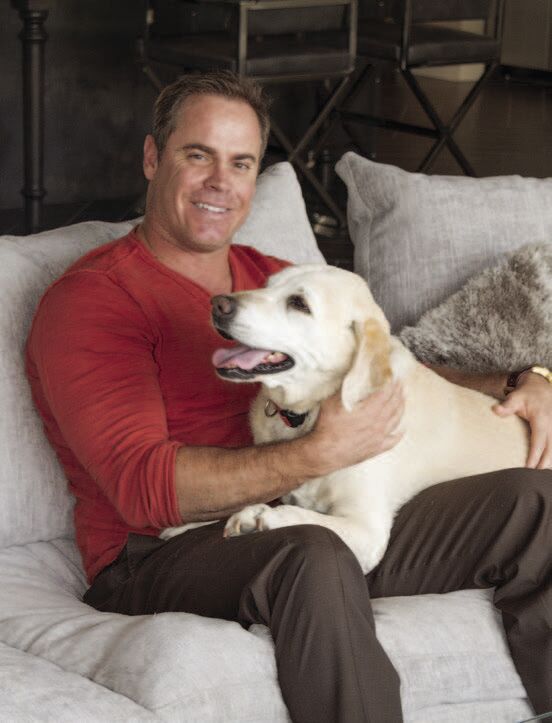 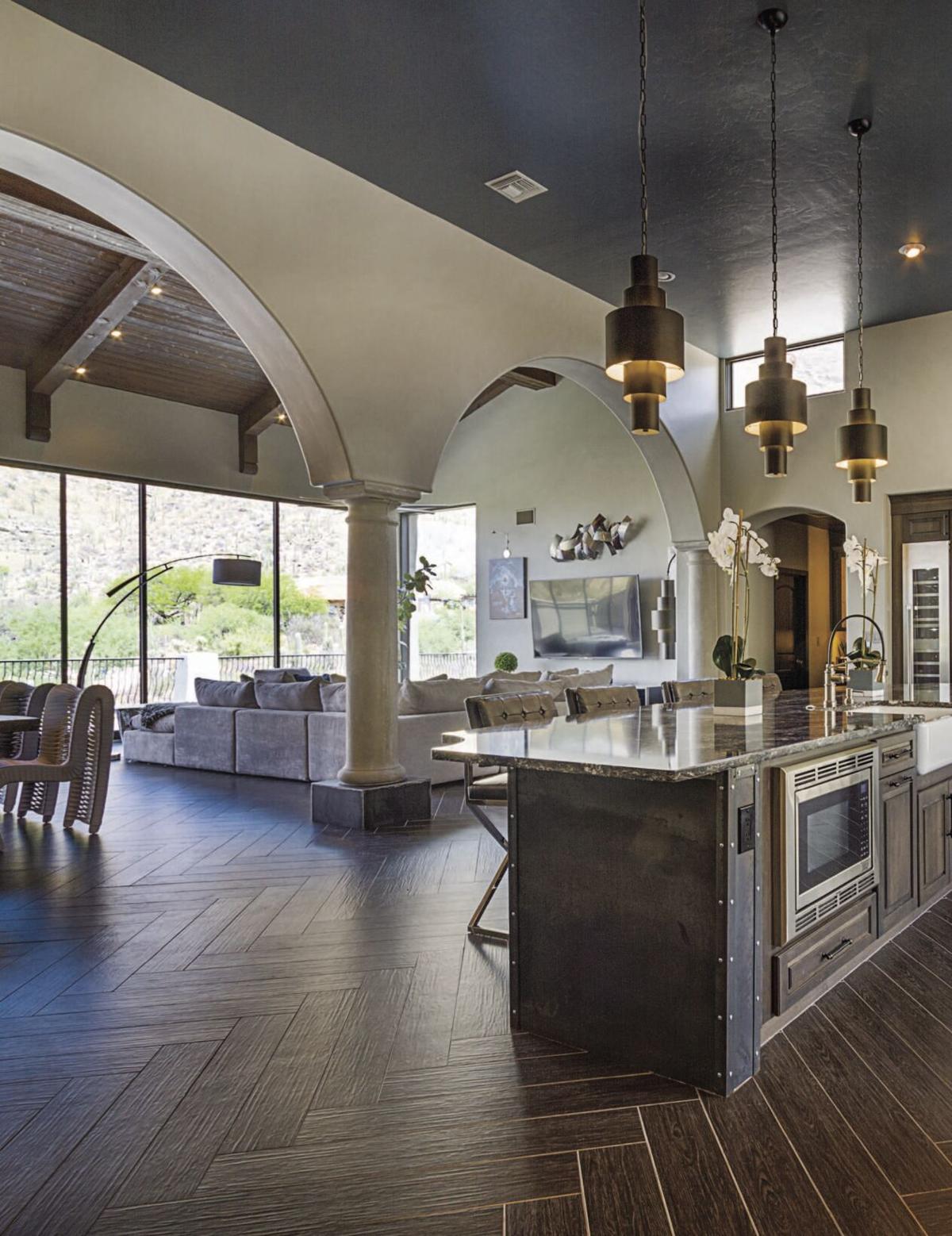 The very modern, open kitchen flows into the living area, where impressive views are a highlight. 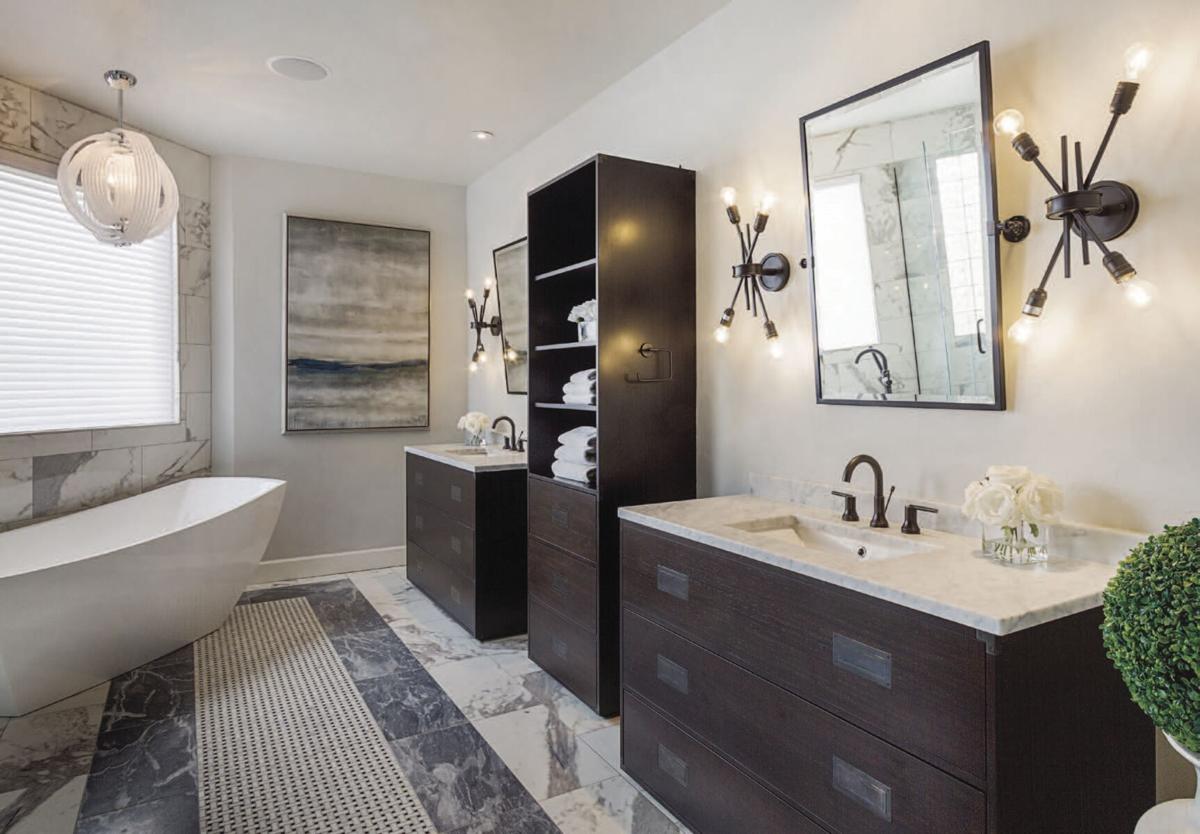 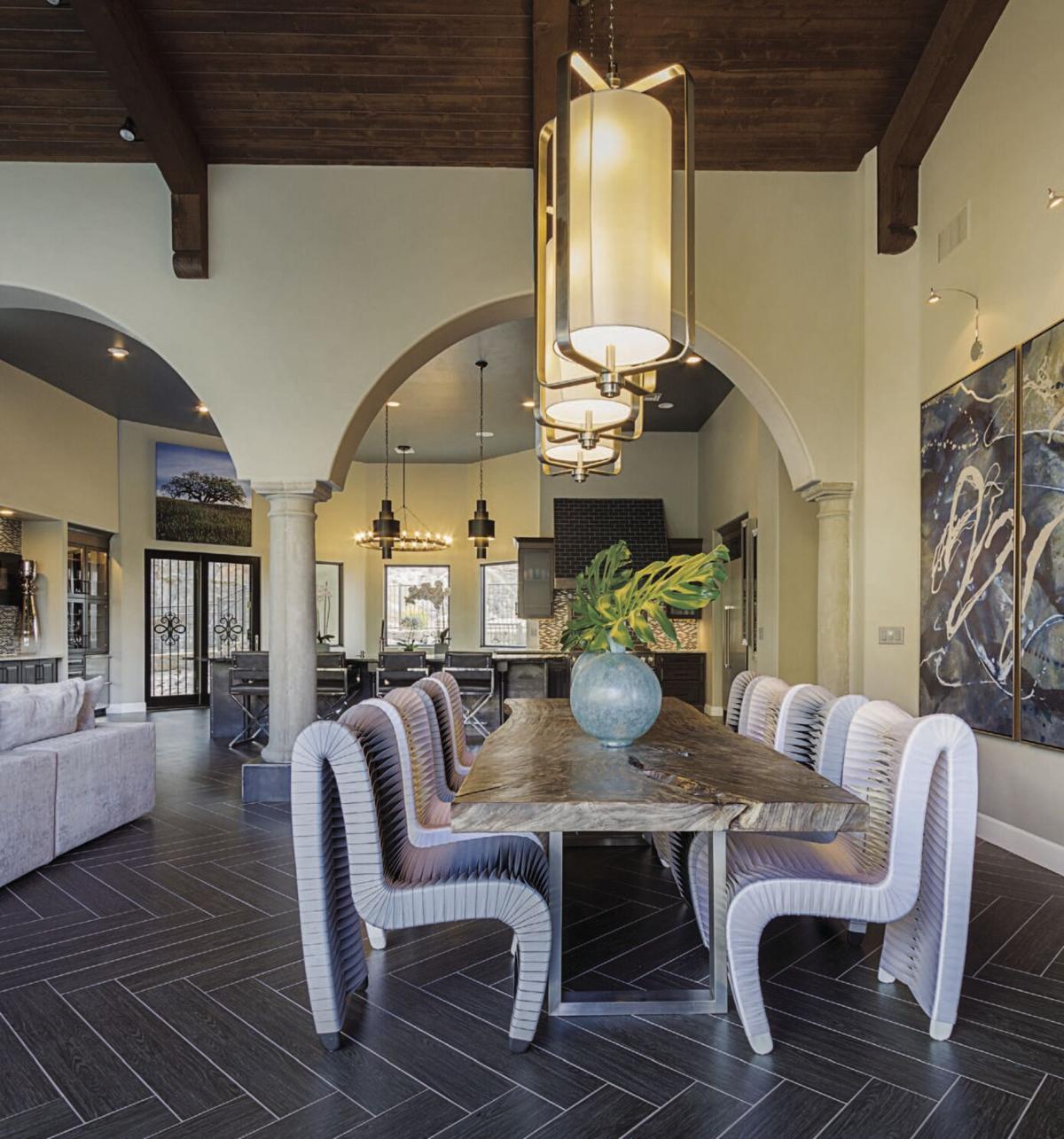 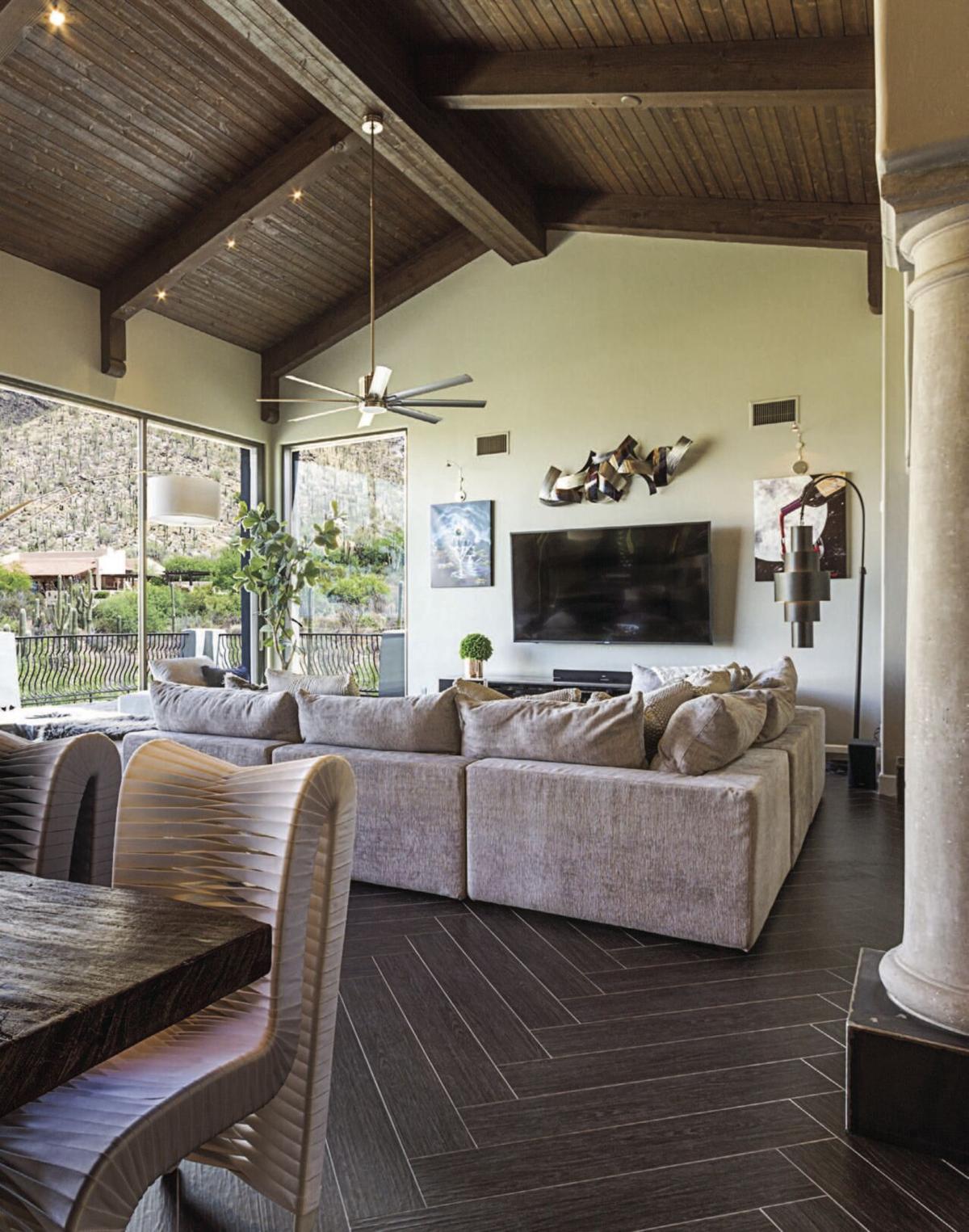 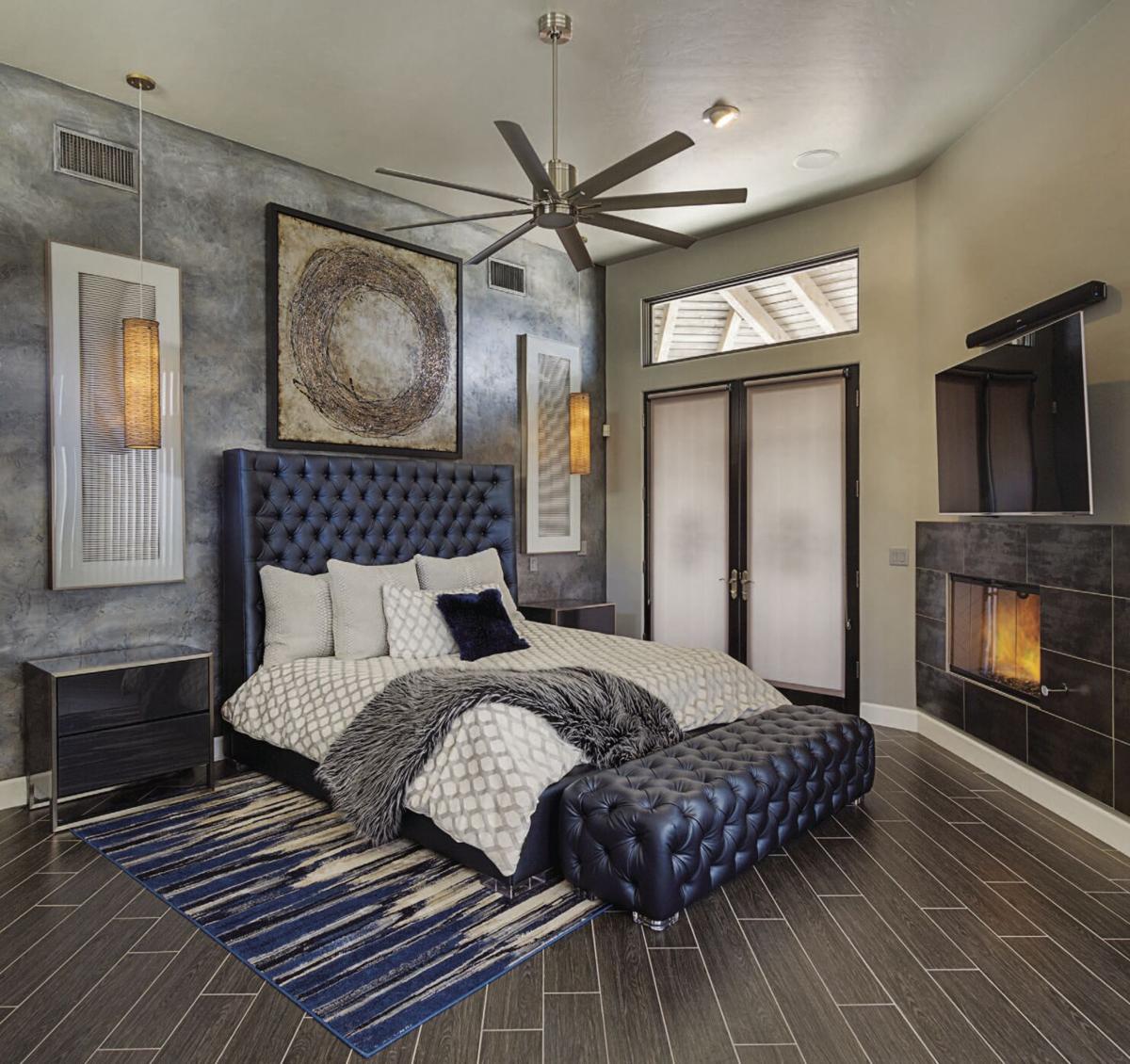 This remodel project took some design cues from a famous fictional character.

When Rob Purvis laid eyes on the Mediterranean-inspired home in Rancho Sin Vacas, he saw a diamond in the rough. At more than 4,000 square feet, the two-story, five-bedroom home would be an ideal place for entertaining, as well as just kicking back.

“I’d been looking for a home for three or four years at that point,” says Rob, who had been living a bit farther north in Oro Valley. “I wanted something closer to town.”

The home was move-in ready, but Rob felt some of the living spaces were disconnected. A horseshoe-shaped kitchen island effectively cut the space off from the rest of the great room. Also, the stunning view of the Santa Catalina Mountains was somewhat obstructed by a wall of clerestory windows and two sets of small French doors.

Rob called on the expert team of Brandy Holden, Eva Murzaite and Ana Fernandez, of Interiors In Design, to help him realize his vision.

“When it comes to things like this, I don’t have the gift of being able to envision it. I have to see it,” Rob explains. The designers used SketchUp rendering software to show Rob how the home would look after the changes — and there were a lot of changes.

First up was replacing the windows and French doors in the great room with a wall of sliding glass doors, allowing unimpeded views of the mountains. “The installers said it was the largest project they’d ever done,” Rob remarks.

The design team also reconfigured the kitchen. The horseshoe island was removed and replaced with a rectangular, metal-clad one. New cabinets, high-end appliances and lighting fixtures give the kitchen and great room a sophisticated style that’s also very livable.

“The kitchen is now one space instead of two smaller ones. It’s not overcrowded and it has a ‘wow’ factor that it didn’t have before,” says Murzaite.

After seeing the upgraded kitchen and the functional flow of the great room, Rob decided on new flooring — a dark brown wood tile laid in a herringbone pattern. The designers stained the vaulted wooden ceiling a chocolate tone to complement the new flooring. They also sandblasted the concrete pillars in the great room to give them a clean, almost industrial look. Next, they clad the base of each pillar in metal, tying them in with the kitchen island and the overall flow of the room.

“The room is a big space,” Holden notes. “The raw steel and exposed concrete are bold, raw elements that tie everything together.”

Holden says one of her favorite parts of the project was the master bath remodel. “We wanted to be mindful of cost and upkeep while at the same time designing a beautiful, functional room,” she says. “It was fun to be creative and figure out ways to generate a specific look with alternative materials.”

For example, the bathroom flooring appears to be marble, but it’s actually porcelain with marble inlays. This clever approach gives the space a very high-end look at a fraction of the cost.

As the remodel was underway, the designers began furnishing the home. They knew Rob wanted a modern look and, after working with him and getting a better sense of his vision, they began calling the project the “007 House,” in honor of the fictional spy James Bond.

To select furniture, the team brought Rob to the famed Las Vegas Furniture Market, a high-end emporium exclusively for interior designers that features the very latest in furniture styles and trends. “We walked through and he would tell us what he liked,” Murzaite says. “It’s important to look, touch, and try a piece before you buy it.”

Although the furniture they saw was gorgeous, it was important that it also be livable. “I told them I needed a football-watching sofa,” Rob says with a laugh. “Some things we saw were pretty, but they weren’t comfortable.”

Ultimately, the group found perfect pieces for the home — not only the great room, but the dining room and each bedroom as well. The end result is an elegant home with a singular design vision that visually connects each room.

After the remodel was complete, a process that took about six months, Rob moved into the home, and he couldn’t be happier with the results.

“When I come home, I’m happy,” he enthuses. “I’ve been talking about having a house like this for many years. I really love this house.”