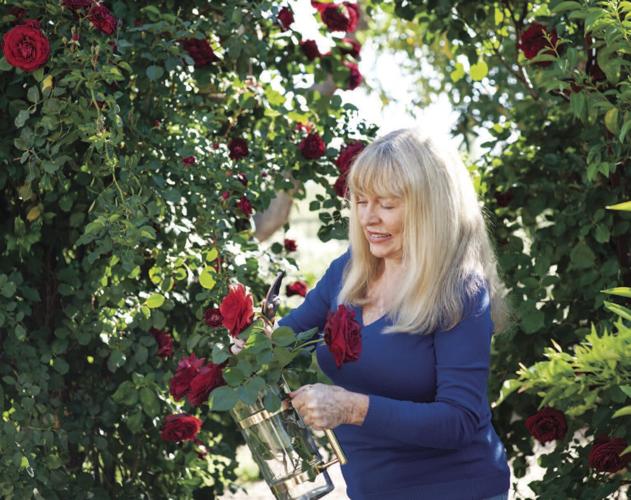 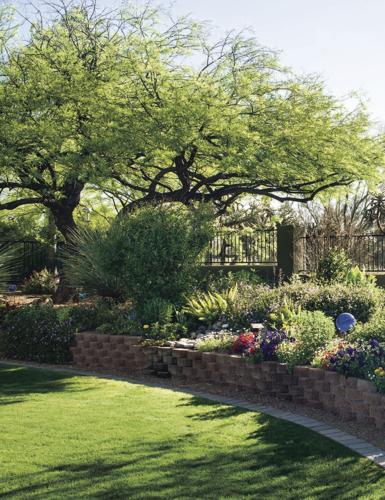 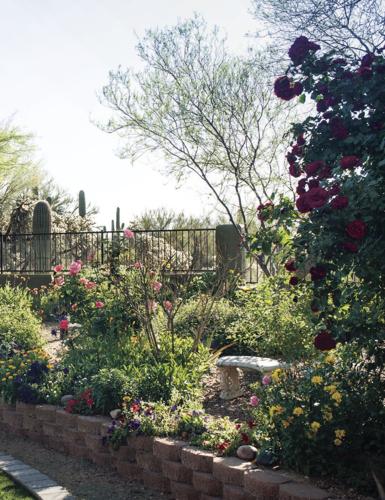 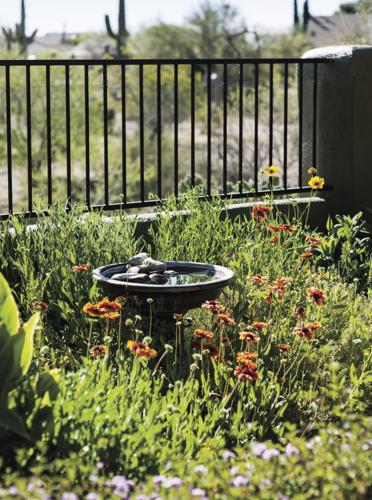 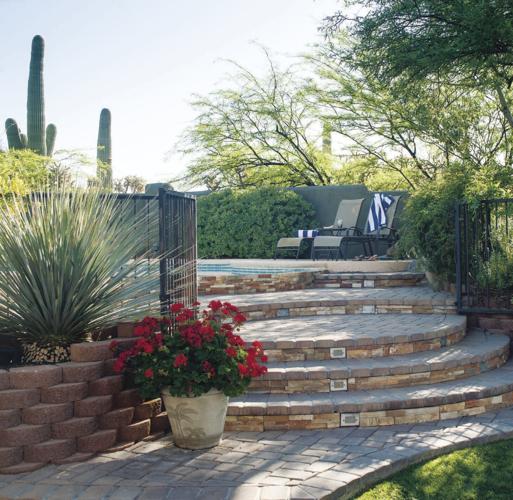 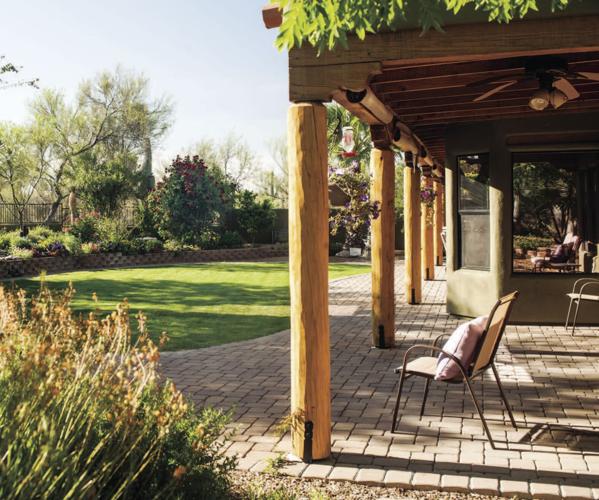 Winter visitors who are new to desert gardening quickly learn that things are a bit different here.

Carolyn Bushong discovered that fact eight years ago, when the part-time Colorado resident went in search of one of her favorite flowers to freshen the backyard of her new Tucson-area home for a spring party.

“My first shock was when I went to Harlow Gardens to buy petunias,” says Carolyn, a relationship therapist. “They said, ‘Petunias are winter plants here.’”

A basket of petunias at the Denver-area summer home that she owns with her longtime partner, Alan Errickson, lasts only four warm months, Carolyn explains. It’s the same with geraniums, which also are among her favorites.

For years Carolyn relocated pots of flowering plants from the deck of their mountain home into their 150-square-foot greenhouse when temperatures dropped. When they moved to Tucson’s northwest side as winter visitors, she found that those plants could live outdoors for most of the year.

It was a pleasant discovery that convinced her that she and Alan might enjoy living in Tucson. The couple wanted to spend winters in warmer weather, but Carolyn was not interested in gardening from scratch in the bare backyards that came with the newly built homes that Alan liked. “I was looking for something that already had some mature trees and vegetation,” she says.

After a great deal of searching, they fell in love with a remodeled home. Carolyn immediately was drawn to the backyard created by the previous owners of the 1.5-acre property.

A drip system had helped to facilitate a garden that includes flowering bushes and groundcovers, trees and a lawn. Beyond a fence were cholla, agave, prickly pear, 40 saguaros and other native plants in an untended part of the property.

Sparsely planted two-foot-high garden beds of purple lantana were ready for Carolyn to create her own look. She knew that not only would she and Alan have a new home, but so would her Colorado plants.

“I said to Alan — and he was not thrilled about this — ‘Honey, I want to get a rental truck and take all the plants in our greenhouse down to Tucson,’” she recalls. Their big pots of geraniums, roses and more ended up making the move.

“The roses, a tangerine tree and other plants I brought are loving this weather, and my oleander is especially happy,” she notes.

An arch large enough to walk under, a bird bath and gazing balls also made the trip to the backyard, which Carolyn’s friends describe as a California-style landscape. Her focus is on plants with lots of blossoms and color.

One of Carolyn’s first tasks when she and Alan arrive in Tucson in early fall is to plant fresh annuals. She lines the edge of the beds with mums, marigolds, pansies, petunias and other cool-weather bedding plants in her favorite colors of red, purple, yellow and white.

Carolyn has spent most of her life caring for plants. She grew up next to her grandmother’s soybean and corn farm in Illinois and helped her father with the family’s vegetable garden. She previously was married to a botanist, “and he helped me develop great gardens,” she says. When she moved to Aspen, Colorado, in her late 20s, she even worked in a small plant shop.

“What I love the most about gardening in Tucson is how everything grows here during the winter while it’s snowing in Colorado,” she says with a laugh.

She tends to the plants except for big trimming jobs, which she leaves to a maintenance service. She says she doesn’t need to do much except deadhead spent blossoms and occasionally cover plants before freezes. She observes that the secret to her garden is fertilizer and a reliable irrigation system.

Carolyn has been able to keep a tomato plant producing through the winter, and regularly grows winter crops like herbs and lettuce. Sunflowers that only grew knee-high within weeks in Colorado now need to be trimmed back so that they don’t block the inviting views of the Santa Catalina Mountains.

Another plant that would block that view if it wasn’t tamed is one of Carolyn’s best Tucson finds — a “Texas Purple” Japanese wisteria. “I’ve always dreamed of having a wisteria, and was shocked they had them for sale,” she recalls of that 2014 shopping trip to a garden center. The original two-foot vine has spread several feet along fences.

In pre-pandemic times, when spring coaxed the wisteria’s grape flowers, the lavender, the lilac and the “Don Juan” rose bush to bloom in riotous color, the couple threw a party. Friends gathered for beverages, food, conversation and the spectacle of the garden.

“I like showing off the flowers,” Carolyn says. “Also, my tangerine tree and jasmine — the smell is unbelievable. Usually the petunias and geraniums also are at their peak. But the two main things I like to show off are the wisteria and the roses.”

In quieter moments, she delights in the birds that are attracted to the garden. Quail tend to nest in the geraniums and dart about the yard. Carolyn puts out feeders to lure cardinals, doves, hummingbirds, and many other species.

Two springs ago she experimented with the rhythms of native and desert-adapted plants. She bought wildflower seeds and sowed them along the fence that separates the garden from the desert. When the couple returned the following fall, “I had a beautiful blanket of flowers — coreopsis, zinnias, rudbeckia, and more blooming everywhere!” she enthuses.

Occasionally, Carolyn will examine a stray, “volunteer” plant to see if it will flower again to gain her approval. She loves the Mexican evening primroses that have popped up among her petunias, as well as lupine and sunflower, their seeds apparently brought by birds.

She says she appreciates native plants and takes daily walks around the undeveloped desert portion of the property, but it is the garden that she revels in. “It feels like heaven,” she says. “Alan and I call it our oasis.” TL

At Carolyn Bushong and Alan Errickson’s winter home, raised garden beds include a colorful assortment of plants that last from fall to spring