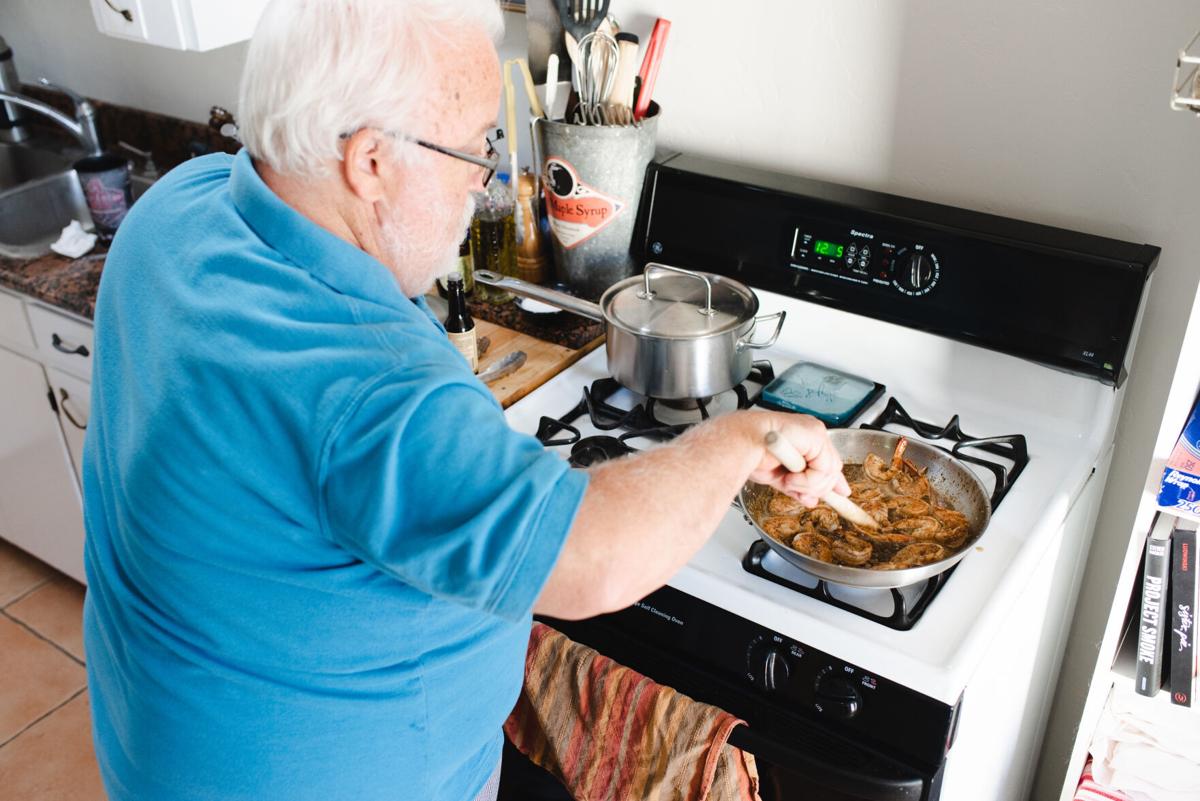 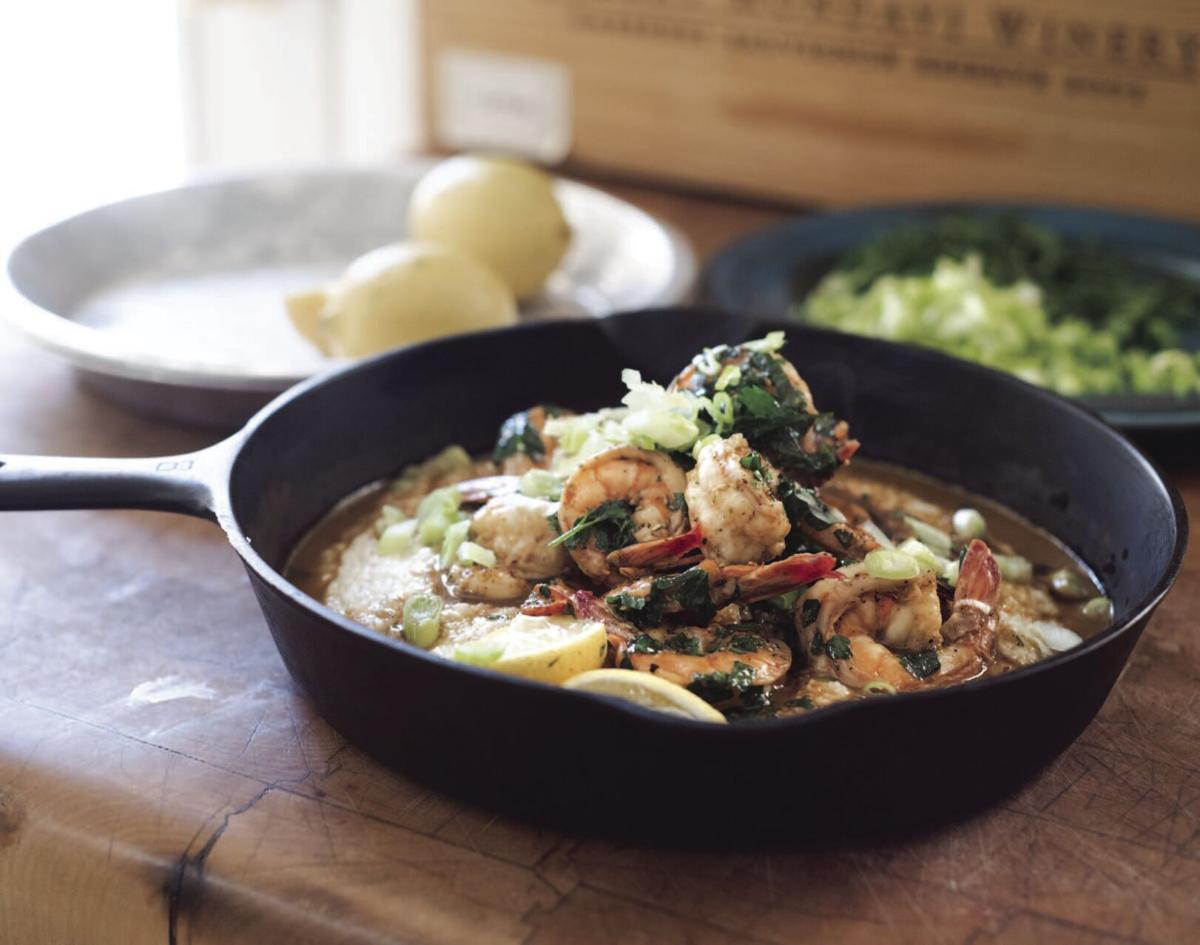 Jim Murphy’s idea of home entertaining [pre-pandemic] would make most weak at the knees. “We have a big backyard,” he explains, “and I’ve got a couple of large tents so we can seat around 80 people. We like to throw big parties.” “Murph,” his preferred handle, is chef and co-owner of the award-winning Kingfisher Bar and Grill, established in 1993. His eatery never rests even after 27 years of allegiance and prosperity. It is simply a great place for fresh fish and other delights, and is further renowned for their perfection of libations. Kingfisher has been crowned in a Best of Tucson list by local media for more than a decade running.

Jim grew up in suburban Phoenix with a mother who knew her way around a piece of Orange Roughy. “She would wrap the fish in a foil packet with a pat of butter, some lemon and herbs — so easy. I know we were the only kids on the block eating fish that often back in the ’60s.” Jim was joined at the family table by four brothers, two of whom also grew up to be professional chefs, and a sister.

Jim worked in restaurants as a busboy and server to pay for Jesuit Prep school. The siren song of the University of Arizona found him heading to the southwest, where he continued to support his education with ever-advancing work in restaurant kitchens, including The Vineyard (now Dirtbags) and long-gone Lunt Avenue Marble Club on Alvernon.

His passion for cooking seafood was fully ignited as a line chef at Jerome’s, a popular boîte on Tanque Verde, now inhabited by Canyon’s Crown. And while wanderlust took the young chef to stints at The Westin in Washington D.C., and The Biltmore in Phoenix, Murph returned to Jerome’s as sous chef in 1987 where he met a food server of distinct acumen and beauty — Jackie, who would become his wife.

Karmically, Jackie hailed from New York’s Hudson Valley, home to the renowned Culinary Institute of America, or C.I.A. It was 1990 and the decision to move back east to hone Jim’s cooking talents was a simple one. “We lived in Cold Spring in Putnam County,” he notes.

Murph collaborated with his future business partners Jeff Azersky, Tim Ivankovitch and John Burke back in Tucson while earning his C.I.A. credential. The Iron Mask was on the market, a past-its-prime but still popular restaurant known for serving continental fare such as turtle soup, chateaubriand for two and pink dinner wines. The midtown location was sweet, seating 150 customers, manageable, a private dining room and separate bar area, cozy low ceilings and lighting casting a honey glow over black horseshoe banquettes.

The rest is history, as Kingfisher continues to maintain a level of excellence rarely achieved in the food industry. The crew keeps it fresh with the annual “Summer Road Trip Tour” featuring original appetizers, entrées, desserts and cocktails inspired by different regions of the country. Murph continues to work the line at Kingfisher three to four days a week, perfectly preparing seafood flown in from Hawaii, Houston, the Pacific Northwest and Santa Monica.

To say Murph looks like Santa Claus would be too easy. Google some photos, and you’ll find an elegant formal portrait of Chef Murphy in a spotless white chef’s coat and you’ll find a comically animated shot of the chef open-mouthed, dangling a bouquet garni above a pot of bouillabaisse. In both incarnations though, the faceframing ruffle of white hair, like faux-fur on a kid’s winter jacket, does make him look like Saint Nick. It’s apropos considering the delicious culinary gifts he has been offering Tucsonans for the last 27 years, and Kingfisher … does, indeed, have a chimney.

So what can one expect when invited to dine under the Murphys’ festive backyard tents? “We love to do grilled or smoked fish. We have a charcoal grill, gas and wood grills, and an electric smoker, so we’re pretty well outfitted.” Large platters of grilled veggies accompany the main course, as well as fresh green salad and bowls of hummus drizzled with olive oil

“A lot of times when the restaurant is doing lake perch, I’ll order an extra 20 pounds and we’ll have guests over for a big fish fry in the backyard and make a nice potato salad, or we’ll do a pot luck and people will bring different side dishes, which is really fun.”

Turns out that corn is not the only food that pops. Murph says oysters on the grill “pop” to indicate doneness. The succulent mollusks often are featured at Jackie and Jim’s fêtes, grilled or roasted to be dipped in garlic butter. After a nibble, “My guests say things like, ‘I never would have eaten an oyster before.’” For those who are rawoyster- shy (“a lot of it is a texture issue”), Chef suggests sampling a prized Kumamoto oyster, harvested in the Pacific Northwest.

Although Murph does the primary cooking, wife Jackie is “(just) the star,” he raves. “I’m serious, she was the first female captain at the Ventana Room — the spectacular Loews Ventana Canyon Five- Diamond restaurant, so she’s a pro. We coordinate tables and setting and glassware — there are a ton of other things to do besides cooking, and we do it together.”

For brunch gatherings at Casa de Murphy, guests can be treated to shakshouka (a Mediterranean/Israeli egg and tomato dish) or chilaquiles (strips of fried corn tortilla, simmered in salsa, and served with cheese, eggs, beans or pulled chicken). “It’s all about community and gathering, as well as feeding friends something they’re going to remember.”

Ten trade magazines arrive at Kingfisher monthly, and pages deemed worthy are ripped out and placed in a “For All to Read” folder by Chef Murphy. “I also enjoy reading cookbooks, looking into the minds of chefs and how they pair different things together. I keep that in my mental hard drive and pull it out when I need to. We give the staff cookbooks for Christmas. I order them in November, read them all, and then give them out as gifts!” Murph and partner Jeff Azersky have even written their own cookbook, The Bivalve Bible, encompassing 27 years of Kingfisher recipes.

As for utensils and tools, Murph observes, “Home chefs should have good knives and know how to use them. Start with a paring knife, serrated knife, chef’s knife and French knife made of stainless steel with a high carbon content.

“My home pots and pans are a hodge podge. I use Revere Ware because it’s not too heavy. From the restaurant supply store, I like a quality brand called ‘Update International.’

“My new favorite thing is the Instant Pot, a combination pressure and slow cooker. Jackie, my son and I can get home, famished, and throw together a fabulous meal quickly. We also use our Crock-Pot and electric fryer.”

Mastering the art of cooking fish takes practice, suggests Murph. Start with a forgiving fish like salmon that can be sautéed in hot oil, flipped and finished in the oven; or cod, which lends itself to wrapping in parchment or foil with a splash of wine, butter, herbs, salt and pepper. “It’s about cooking a type of fish once … then figuring out how to make it even better next time.”

For purchasing great seafood, Murph says see Anthony “Levi” Rodriguez, fishmonger at AJ’s Fine Food in La Encantada. “He’s a killer resource, he knows his stuff,” and will share with you how to cook and sauce the fresh slabs iced behind the glass. His family owned L.H. Rodriguez on south 12th Avenue for 40 years.

As for vino, he says, “My favorite wine is the bottle that’s open. Drink what you like.” He likes “Big reds i.e., Cabs, Zins, big Italians, and Malbecs from South America. Stone Street is a nice label for whites, as are those from Provence, France, and rosé from Arizona is quite good.” See Tommy and Jen at The Rum Runner for enlightenment. “They’re longtime friends. I can say, `Jen, I’m looking for this,’ and she can pull out a great wine for around $20.”

And for all parties when bubbles are called for, or just for an evening alone together it’s the ebullient Veuve Cliquot, “Jackie’s absolute favorite,” he says. After all, she is the star.