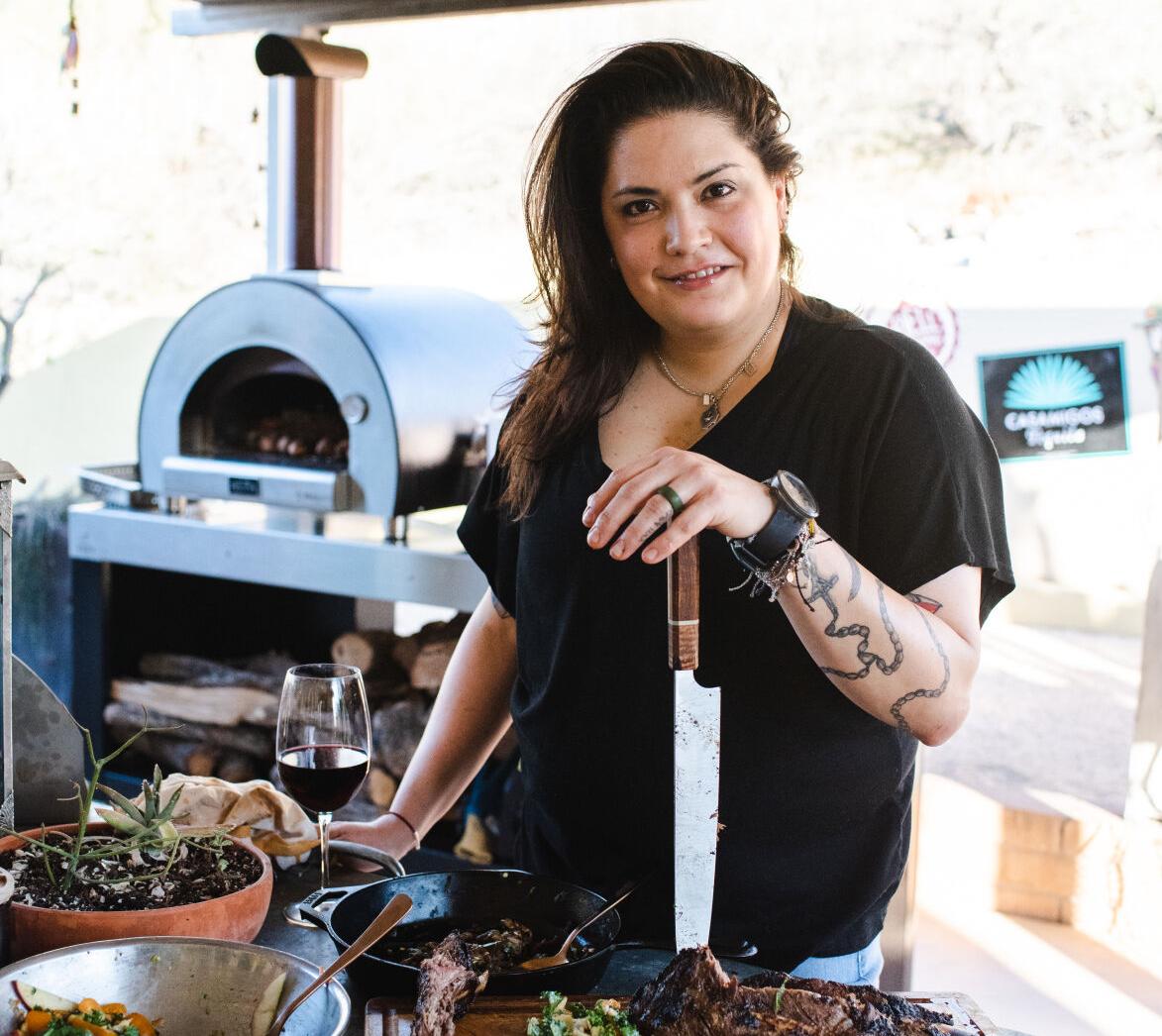 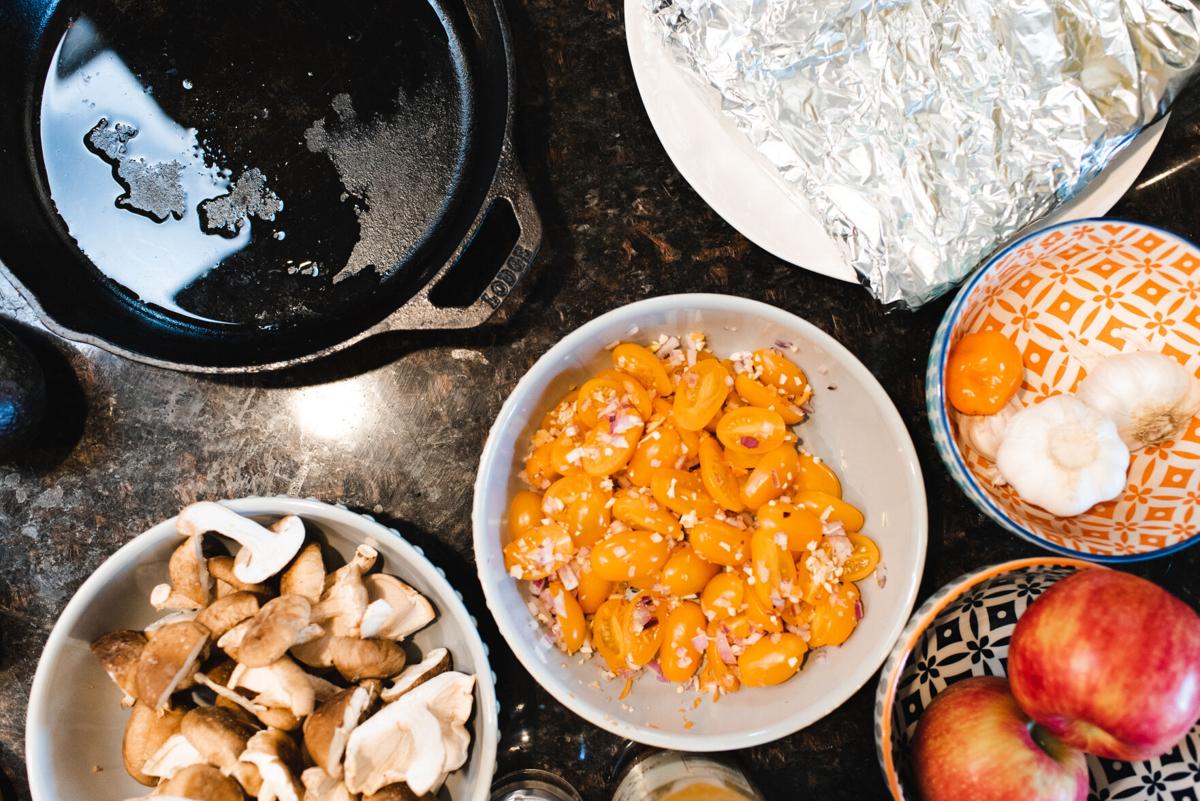 Chef Mazon practices mis en place, as all good chefs do, preparing her ingredients before starting to cook. 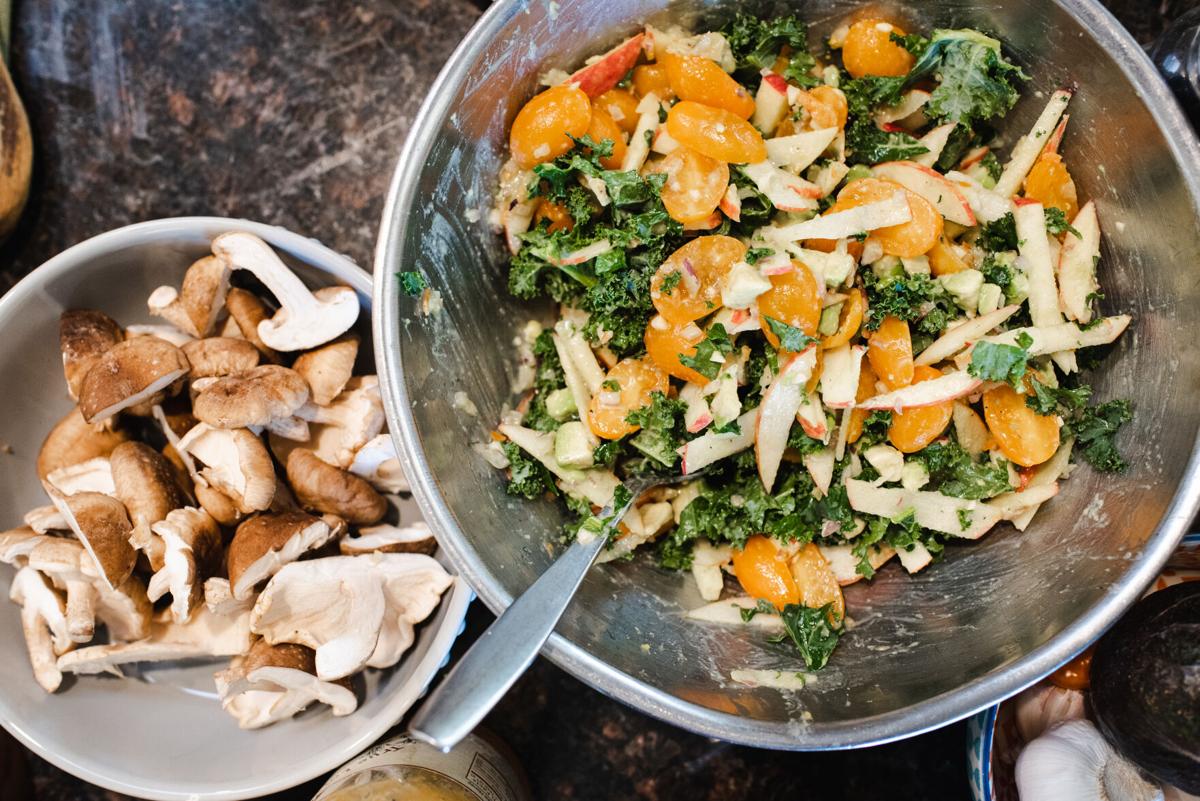 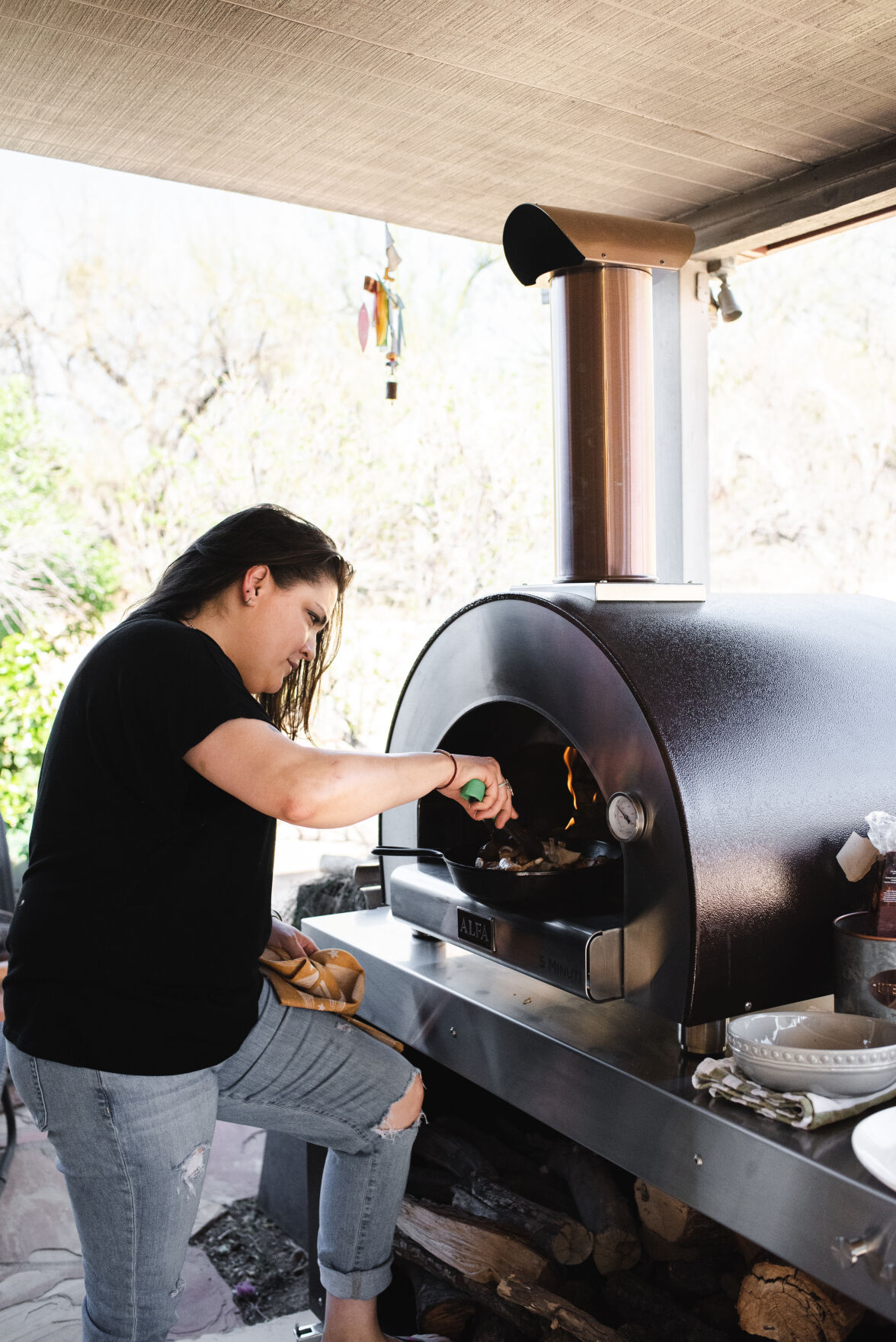 Chef Mazon cooking at home with her Alfa Pizza oven. 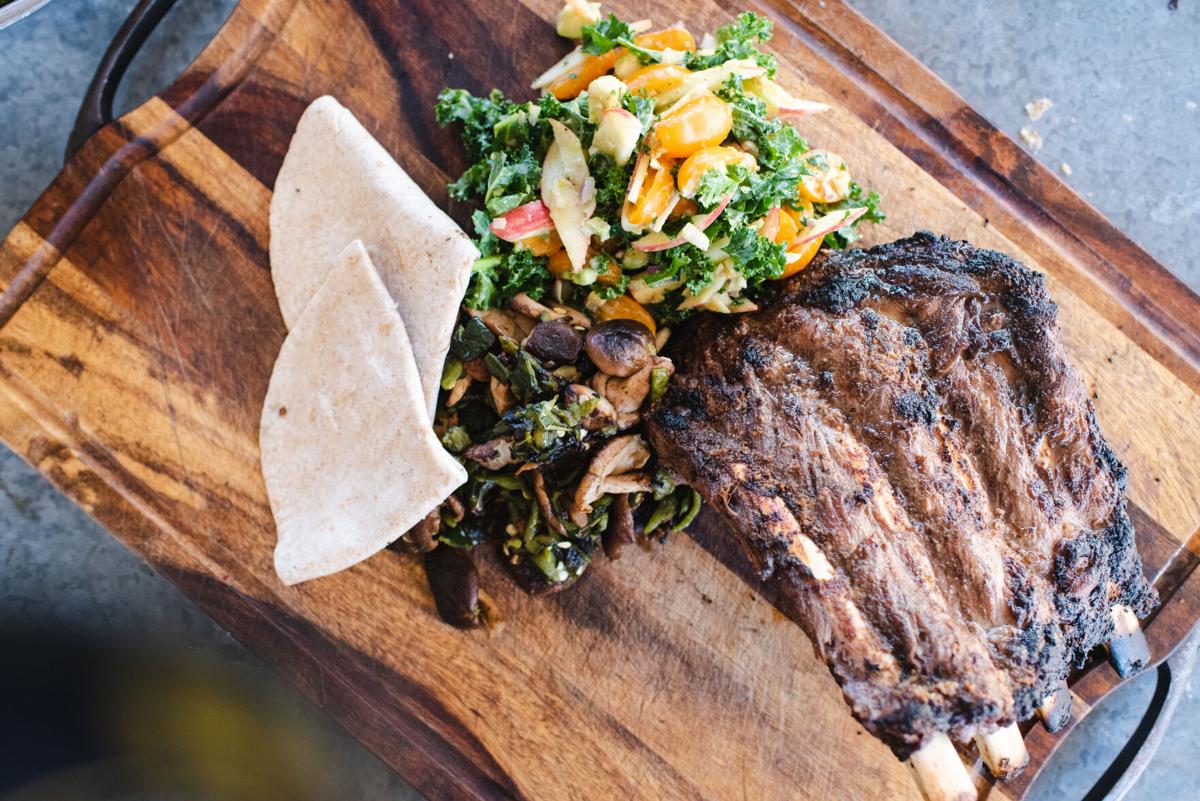 Chef Mazon practices mis en place, as all good chefs do, preparing her ingredients before starting to cook.

Chef Mazon cooking at home with her Alfa Pizza oven.

Maria Mazon’s food is out of this world, and because of that, the renowned Tucson chef has been out of this town for the past three months. The 2020 James Beard Award Semi-Finalist was tapped to compete on television’s most prestigious and popular cooking competition Top Chef. Season 18 was filmed in Portland, Oregon, and pitted 15 of the nation’s best chefs in “quick fire” and elimination challenges over the course of eight weeks. Maria is sworn to secrecy about the outcome but is happy to discuss everything else about her delicious life.

Her restaurant, BOCA Tacos y Tequila, has been featured on The Food Network, Travel Channel and Cooking Channel and written about in The New York Times, The Washington Post and Travel + Leisure. It has been a long road to reach such acclaim. “I pledged to respect what I grew up eating,” she says. “I don’t want to say it was one thing leading to another that put me in the eye of the hurricane. It doesn’t happen overnight.

“To be a great chef, to be a great hostess, you have to be a little gutsy,” she continues. “You have to be fearless, insecure but secure at the same time. I’m putting my food on the table and people are paying me to come to my restaurant.”

Mazon’s portrait on the BOCA website captures her determination — a direct gaze into the lens, inky mane and strong arms crossed. On one wrist, a weighty timepiece, the other encircled with mala beads. Her fingers ringed, thumbs casually aimed toward the heavens, she is a lioness in life.

Mazon was raised in Navajoa, a major agricultural region and the southernmost city of Sonora, Mexico, population 164,000. There, she all but marinated in the robust spices, pungent herbs, and complex layering of flavors, the essence of Mexican cooking. “I remember my nanny Grejoria, better known as ‘Goya.’ She was a great cook, and she was family. She made incredible tortillas and Chile Colorado — tender pieces of beef simmered in red chiles. My mom … well, she was a ‘mom cook,’ prepping ingredients for the Crockpot the night before. She tells me, ‘I made you the great chef you are today,’” Maria recalls with a laugh.

At 15, she moved to Tucson to live with her aunt and bolster her English. She earned a degree in nutrition from Pima Community College but class work was tough to endure. “I’m not ashamed to admit that school is not my cup of tea. I have ADHD galore and I’m dyslexic, so I finished Pima and told my dad ‘I hope this is good, ’cause I’m outta here!’”

There would be no further studies at culinary arts college, no lusting after apprenticeships in New York and Los Angeles kitchens. A student of life, Maria says, “I learned from my line chef and from everyone around me.”

Long timers will recall that BOCA once occupied the space that formerly was Greasy Tony’s on Speedway. In 2017, the restaurant (named after the Spanish word for mouth) moved to North Fourth Avenue into the spot that was Delectables. Patio seating, linear to the street, can accommodate about 40 diners. At press time, there was no indoor seating, but that is in the offing. Canvas umbrellas dissuade the sun while slump block walls enclose the area and strings of bulb lights illuminate the night. Corralled by corrugated aluminum, burgeoning forests of organic herbs enhance the patio and the food: cilantro, fennel, lime trees, tomatoes, peppers, mint, eposote (native to Mexico tasting of fennel and anise), rosemary, oregano, Hoja Santa (“Sacred Leaf,” a member of the peppercorn family), and banana peppers. “The garden is my pride and joy,” Maria observes. “It’s so cool. Imagine you’re the patron and the chef comes out and cuts fresh herbs! I’m very proud of that. The restaurant is about 80 percent locally sourced. To me that’s essential. If you are going to spend money, it’s important to leave most of it here.”

As for the food, it isn’t what you might expect from traditional Sonoran-style eateries. A quartet of fresh-made salsas accompanies an order of the popular starter Boca Balls — chipotle and green chile-spiked mashed potatoes coated in panko crumbs and fried, then striped with guacamole and honey chipotle crema.

Tacos are ordered individually with 30 varieties from which to choose. These include: mole de pollo: succulent chicken marinated in traditional mole sauce, sprinkled with sesame, garnished with guacamole, cabbage and original salsa. The veggie taco features sautéed mushrooms, onion and Serrano peppers, each given proper care so that flavors are singularly appreciated. A layer of Mexican white cheese hugs the house-made flour tortilla, itself glossy, chewy and dime thin.

Indeed, it’s impossible to imagine settling for store-bought tortillas after sampling house-made corn and flour tortillas at BOCA. Fortunately, Mazon plans to start a tortilleria as part of Sona, her essential boutique and bodega, opening adjacent to BOCA. “The ‘S’ and ‘O’ stand for Sonora, where I started, and the ‘N’ and ‘A’ for Arizona, where I’m finishing,” she explains. “We’ll sell Barrio Bread and wine and other local gems. That’s what community is all about — giving young artisans a place to offer their wares. I want people to be able eat at BOCA and stop by Sona for a bottle of wine, a loaf of bread for French toast for breakfast, and fresh flowers. My baby brother Miguel Lamadrid is my business partner, and we’ll also sell BOCA salsa and spice mixes.”

Maria’s out-of-kitchen life is equally gratifying and sustaining. “I’m married to a beautiful firefighter. She’s a captain in the fire department, and we’ve been together for 10 years. It’s funny because they say opposites attract. Lily is everything I’m not. I learn so much from her patience.” The two are raising a 13-year-old son, Rene, named for Maria’s great grandfather. “Not to sound too girly, but he is my engine.”

The family plans to go RVing this summer, cruising up the California coast. “Rene is a really smart kid. He loves museums and monuments,” Maria says. She and Lily also hope to weekend in Mexico City, “to recharge and gain more inspiration.”

Entertaining at home has to be planned months in advance. “We are just so busy. The last gathering was with Dan Gibson, his kids and wife Tara,” Maria observes. “I met Dan when he was at the Tucson Weekly. He liked what I did and that I was no B.S.” The gathering found Maria manning the grill and adults sipping good wine. “We enjoyed each other’s company and tried to fix the world’s problems.” Gibson, who currently is Senior Director of Communications for Visit Tucson, has been afforded an honor more prestigious than a James Beard Award — a taco on the BOCA menu bearing his name. The Dan Gibson is composed of barbacoastyle beef cooked in tomato chile sauce. Whatever is on the menu, a glass of wine at day’s end is essential to Chef Mazon. Her “venom of choice?” Two reds — Grenache (spicy berry-flavored, soft on the palate); and Tempranillo (earthy and fruity with notes of leather and cherry).

At home, essential kitchen tools include a Vitamix, a gas and charcoal grill, an Alfa pizza oven, a modern Instant Pot and lessmodern Crockpot, reminiscent of Mom and cueing a memory of the family table decades past. “Mexican people eat a heavy meal at lunch and a lighter one for dinner,” Maria reflects. “If I close my eyes, I remember my mom picking me up from school at 1:30. I went to an all-girls school with nuns. And then we’d go to the tortillerilla; my mother would give me 10 pesos to buy fresh tortillas, wrapped in paper. Later, we’d gather round the table — my sister, me, my mom and dad, and say grace.”

Her mother’s cookbook, a wedding gift, burnished and dog-eared, sits in her office, too fragile to be opened. “I just look at it and remember where I came from,” she says. She deems Doña Cucá Cardenas’ Mis recetas de cocina “my secret weapon:, every housewife in Mexico had a copy.” Authored by the Queen of Sinaloan cooking Doña — aka Maria del Refugio Fonseca de Cardenas — the book was compiled from family recipes.

For BOCA fans, a Top Chef viewing party is a must for Thursday evenings until the finale on May 15. Chef Mazon is, after all, one of us, representing Tucson and Sonora on a global stage. Win or lose, there is no doubt she will do us proud, competing with passion, determination and the vibrant colors and flavors of the Southwest and Mexico.