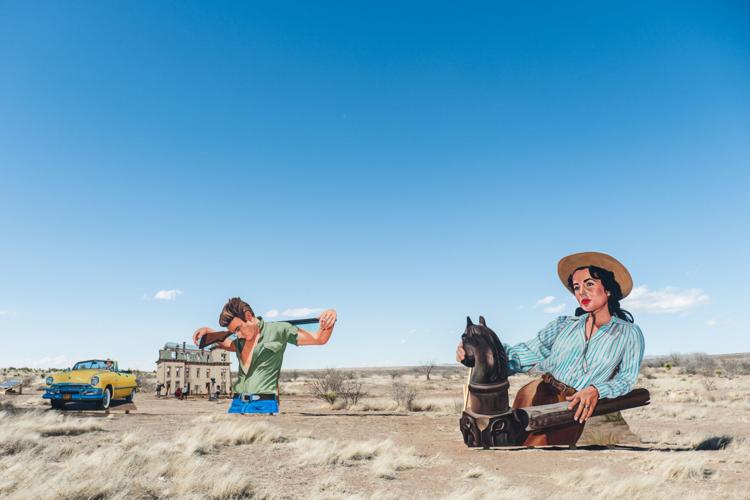 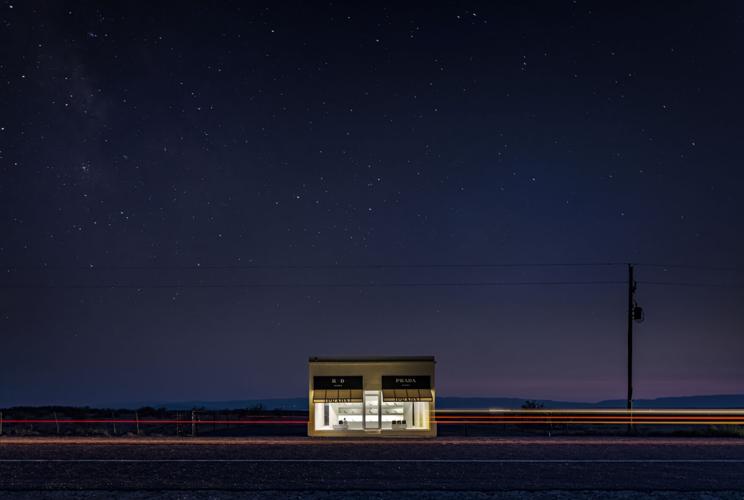 Prada Marfa is a permanent sculptural art installation by artists Elmgreen and Dragset, located along U.S. Route 90 about 26 miles northwest of Marfa. 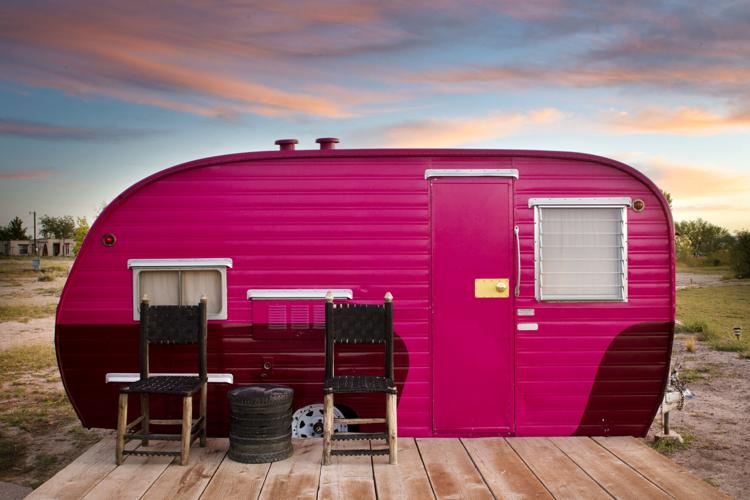 This trailer at El Cosmic is just one of Bohemian places to stay in the area. 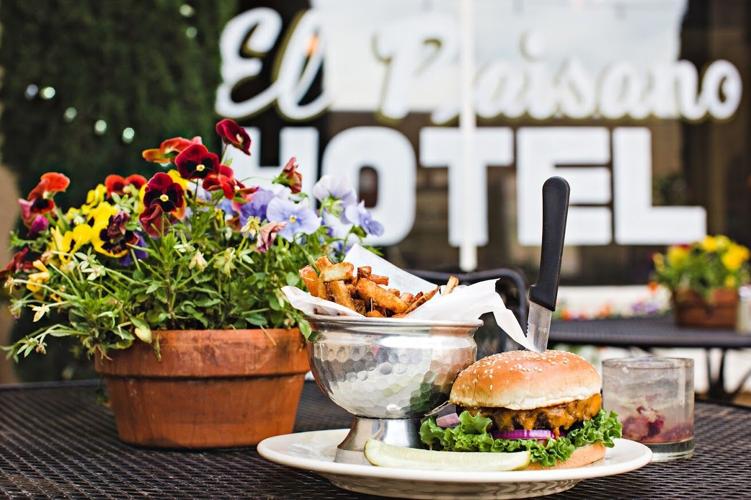 Prada Marfa is a permanent sculptural art installation by artists Elmgreen and Dragset, located along U.S. Route 90 about 26 miles northwest of Marfa.

This trailer at El Cosmic is just one of Bohemian places to stay in the area.

No cross-country road trip would be complete without a pit stop (or two) in Texas — the great Lone Star state. If live music, art galleries, big skies and creative cuisine are your thing, then why not make it Marfa — a magical town where the rich and famous go to escape, and the ranchers still rise at dawn, working hard until the day is done.

In the Big Bend Region of West Texas along Highway 90 — just 60 miles north of the Mexican border and 200 miles southeast of El Paso — is where you’ll find this tiny Texas town.

The place dates back to a wild, yet romantic time, when settlers longed for the freedom one only seems to find in the West. Today, visitors and locals alike marvel at the geological time scale present in the surrounding mountains. In fact, the largely undeveloped area still holds evidence of the earliest humans to this day.

You don’t have to close your eyes to imagine what Marfa may have looked like hundreds, even thousands of years ago. It still looks very much the way it might have then, evoking a sense of solitude and meditation for all who travel there.

Marfa’s history is rich, and still woven into day-to-day life.

Abby Boyd, the Director of Tourism for the town, notes there was a strong military presence that lasted from 1911 to 1946, and it had a profound effect on the look and feel of Marfa today.

It wasn’t until the late 1970s that the town experienced its second renaissance with the arrival of American artist Donald Judd. He associated himself with minimalism, and sought autonomy and clarity in his work, all of which can clearly be felt throughout the art scene in Marfa.

The town offers the space and slower pace to create and contemplate art, or other life matters. Marfa’s internationally renowned art scene goes hand-in-hand with its iconic and breathtaking landscape.

You can view Judd’s large-scale work in and around the Chinati Foundation, which utilizes the former Fort D.A. Russell.

Although there is no doubt that Judd was influential in putting Marfa on the map, some might not realize that the town and surrounding area actually already looked this way — he simply brought it to the world’s attention. One more recent addition, however, is Prada Marfa, an art installation on Route 90 erected in 2005 by Elmgreen and Dragset. Though it looks just like a red Prada store circa early 2000s, it’s all show and no go.

It’s precisely that small town charm — which doesn’t seem to be going anywhere anytime soon — that locals and tourists find irresistible. Boyd says part of the simple life is … enjoying life’s simple pleasures! In Marfa, sunset is an event and stargazing is an activity. Walking is a pleasure, and driving to the grocery store or the next town provides the perfect opportunity to take in the vast landscape or sing along to the radio. What you definitely won’t have to worry about is traffic. Rush hour in Marfa is unheard of. What prevails in this walkable Texas town are loads of local shops, art galleries, eateries and places to hear live music.

The Marfa Lights Festival celebrates the strange aerial illumination that has been reported near the town. Photo courtesy of Marfa Visitor Centers

You’ll find no shortage of locally made goods, as well as those reflecting the spirit of the West, up and down Highland Avenue.

Take home some custom-made leather shoes from Cobra Boots, or stop by Communitie and buy that brand-new Stetson you’ve been longing for. A nice bottle of whiskey from Cactus Liquors, and locally made bitters from Freda will make the perfect Old Fashioned for your next cocktail party, which your guests can sip while they recline in chairs made at Garza Furniture Design.

World-renowned artists aren’t the only ones flocking to Marfa. It’s the chefs who are making this community of only 1,800 residents a desert foodie destination.

Craving a Texas-sized burrito after a long night of tequila and two-stepping? Marfa Burrito has you covered. Texas barbecue?

Convenience West is the place to be. The pistachio-crusted sirloin steak from Jett’s Grill at Hotel Paisano (where the James Dean/Rock Hudson epic Giant was filmed) will hit the spot if you’re feeling a bit fancy.

The list of places to eat and enjoy incredible cocktails is ever-changing in Marfa. Many of the spots have earned national acclaim, and rightly so!

Something else about Marfa that’s gained widespread attention for years are mysterious aerial lights. The Marfa Lights — or Marfa Mystery Lights, as some call them — attract visitors from around the globe.

Dancing across the western horizon, this illumination of unknown origin has been reported by Native Americans, ranchers and meteorologists for years.

No matter what time of year there is always something happening in Marfa.

With it being just a quick eight-hour drive from Tucson, there’s no excuse not to make Marfa your next long-weekend escape. It is a place for creatives, performers, painters and photographers. For filmmakers and musicians, and for meditators and explorers. It’s a place where you can get excited to walk into a store or restaurant and be greeted by a smiling face.